Today the Chinese stock market did something unthinkable: it plunged to fresh post 2009 lows on news so bad they would have been enough to send the stock markets of such “developed” bizarro economies as the US and Europe limit up. The catalyst, as Bloomberg reports, was that Chinese industrial companies’ profits fell in July by the most this year, a government report showed today, adding to evidence the nation’s economic slowdown is deepening. Income dropped 5.4 percent last month from a year earlier to 366.8 billion yuan ($57.7 billion), the fourth straight decline, National Bureau of Statistics data today showed. That compares with a 1.7 percent slide in June and a 5.3 percent drop in May. What is disturbing is that the slide persisted even as revenue in the first seven months increased 10.6 percent to 50 trillion yuan, today’s report showed. Which means that cost and wage pressures are starting to truly bite Chinese corporations, that the US ability to export inflation to China is much more limited, and that one can forget the PBOC easing monetary conditions any time soon for many of the reasons discussed in the past week. It also means that China is now stuck hoping that Wen Jiabao will at least implement some fiscal stimulus. The reality however, judging by the SHCOMP’s reaction, is that the benefit from fiscal programs in China, and everywhere else, is far more limited than monetary policy intervention. End result: SHCOMP down 1.74%,to 2,055, a three year low. 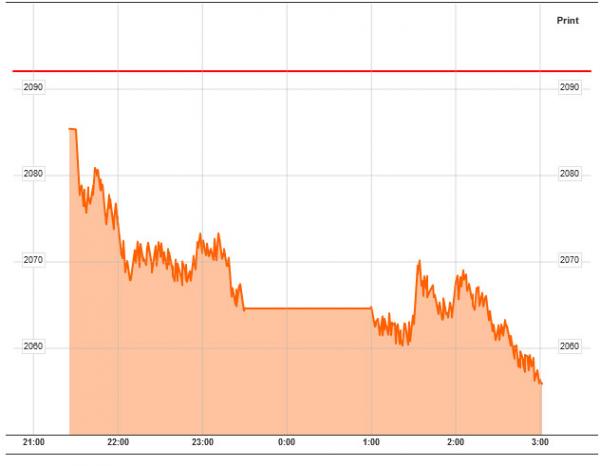 Today’s data add pressure on the government to step up policy easing to reverse a slowdown that may extend into a seventh quarter. On an inspection of Guangdong province from Aug. 24 to 25, Premier Wen Jiabao said difficulties in stabilizing the expansion are “still relatively large” and called for measures to promote export growth to help meet the country’s annual economic targets, the Xinhua News Agency reported.

“The economy is slowing faster than what had previously been expected,” said Patrick Bennett, a strategist at Canadian Imperial Bank of Commerce in Hong Kong. The profit outlook is for “further weakness throughout the year,” he said.

Industrial companies’ profits in the first seven months of the year declined 2.7 percent to 2.7 trillion yuan, according to today’s statement. That compares with a 2.2 percent drop in the first half and a 28.3 percent gain in the same period in 2011.

Bank of America and Deutsche Bank AG this month reduced their forecasts for full-year economic expansion to 7.7 percent, which would be the slowest pace since 1999. Wen in March set a target of 7.5 percent.

Deutsche Bank’s Jim Reid had this to add:

Asian equities are weaker despite the positive US lead on Friday. The Hang Seng and the Shanghai Composite are down 0.15% and 1.32% as we type as China‘s latest industrial profits dropped 5.4%yoy in July (-2.4% year-to-date). Chinese Premier Wen was quoted by state media over the weekend as saying that “negative factors…will affect stable economic operations in the second half” and the difficulties of estabilising growth are “relatively large”. Adding to the negative sentiment, BHP Billiton CEO commented that he expects ”long-term” price declines for the miner’s commodities as slower economic expansion in China weighs on demand. Iron ore prices continue to fall with the spot benchmark down for its 8th consecutive day on Friday.

Finally, the Telegraph adds some more color on what is now China’s last recourse, namely more fiscal stimulus, since courtesy of the risk of soaring Soybean prices first predicted here over a month ago, and since confirmed, the PBOC’s hands are tied:

The Telegraph has travelled to the south of China over recent days to witness a slowdown in the coastal economy and in the export sector, and also to areas which are flourishing with new investment, and where the local economy is booming. The picture appears mixed. China, geographically almost the same size as the Eurozone, appears to be struggling in some areas and flourishing in others. A new inland corridor, running from Liaoning in the north to Guizhou in the south, through cities such as Wuhan and Changsha, is booming.

In response, Guangdong has unveiled 177 “core projects” worth 1 trillion yuan, joining a long list of local governments to announce “stimulus” plans. The huge cities of Chongqing and Tianjin, meanwhile, both said they would spend 1.5 trillion yuan, while Guizhou, one of China’s poorest provinces, has said it will spend 3 trillion yuan on eco-tourism and creating a series of national parks.

The central government, meanwhile, said it would spend to plough 2.4 trillion yuan into reducing carbon emissions and energy conservation programmes over the next three years, and has already set aside 26bn yuan in subsidies to encourage consumers to switch to low-energy appliances.

The role call of announcements may be a signal that after half a year of fine-tuning monetary policy, the government is preparing to take more drastic measures.

While the Communist party had pencilled in slower growth of 7.5pc for this year, in order to restructure and rebalance the economy, there are indications that China may suffer, or may already have suffered, a “hard landing”, where growth would fall to below 7pc.

“A hard landing in China would look like the fourth quarter of 2008 and the first quarter of 2009 when exports collapsed, factories had no orders and migrant workers were laid off by the tens of millions,” says Wang Tao, an economist at UBS.

Mr Wen said many “negative factors” would continue “to affect stable economic operations in the second half” and that the difficulties of boosting growth are “still relatively large”.

“Facing the current difficulties, we have to improve the operating environment for companies and enhance the corporate confidence,” he said.

At this point all we can add is that we are jealous and envious of China, where men are men, women are women, bad news are no longer not good news, and things are finally starting to make sense. As reported earlier, expect US stocks to soar on the realization that for China a hard landing now looks inevitable.