– Buffett Joins Team Whitney; Sees Muni Pain Ahead As He Unwinds Half Of His Bullish CDS Exposure Prematurely (ZeroHedge, Aug 20, 2012):

Just under two years ago, Meredith Whitney made a much maligned, if very vocal call, that hundreds of US municipalities will file for bankruptcy. She also put a timestamp on the call, which in retrospect was her downfall, because while she will ultimately proven 100% correct about the actual event, the fact that she was off temporally (making it seem like a trading call instead of a fundamental observation) merely had a dilutive impact of the statement. As a result she was initially taken seriously, causing a big hit to the muni market, only to be largely ignored subsequently even following several prominent California bankruptcies. This is all about to change as none other than Warren Buffett has slashed half of his entire municipal exposure, in what the WSJ has dubbed a “red flag” for the municipal-bond market. Perhaps another way of calling it is the second coming of Meredith Whitney’s muni call, this time however from an institutionalized permabull.

In bad news for the bullish muni community, the Octogenarian of Omaha has terminated $8.25 billion worth of sold municipal insurance (or half of his total, the balance of which he is unable to terminate, or technically, novate, due to timing limitations), a move which the WSJ says “indicates that one of the world’s savviest investors has doubts about the state of municipal finances. If so, the move could be a warning to investors who have purchased such debt. In canceling the contracts early, Mr. Buffett probably “doesn’t want this exposure anymore and is getting out while he can,” said Jeff Matthews, a hedge-fund manager who personally owns Berkshire shares.”

In what is worse news for the bullish muni community, the fact that Buffett closed the position at substantial losses indicates that the once deified investor is willing to swallow his pride, and despite his massive balance sheet, refuses to wait out the expiration of the insurance, implying he sees not only major shockwaves ahead, but turbulence that is imminent (if only M-Dub had waited until now). What is worst, is that Buffett’s bearish move comes at a very fragile time for the muni market: weeks after three consecutive bankruptcies shook California, and just as various other cities are contemplating strategies to impair bondholders (a la Greece and Belize) to avoid all out Chapter 9.

The insurance-like contracts, which required Berkshire to pay in the event of bond defaults, were originally purchased by Lehman Brothers Holdings Inc. in 2007, more than a year before the Wall Street firm filed for bankruptcy, the person said.

Details of the termination, with the Lehman Brothers estate, weren’t disclosed. It isn’t clear whether Berkshire’s move will leave the company with a profit or loss on the wager. Mr. Buffett, Berkshire’s 81-year-old chairman and chief executive, declined to comment.

Actually, assuming the following chart from the WSJ is correct, it is fairly safe to assume that Buffett will close out with a substantial loss. Having sold over $8 billion in insurance on what appears to be 10 year duration CDS at 20 bps, the fact that he is unwinding at a spread four times wider, at a massive DV01, means that there is no way the roll alone would have offset the blow out in spread. As a result it is fair to assume that hundreds of millions in P&L were lost as a result of this trade. 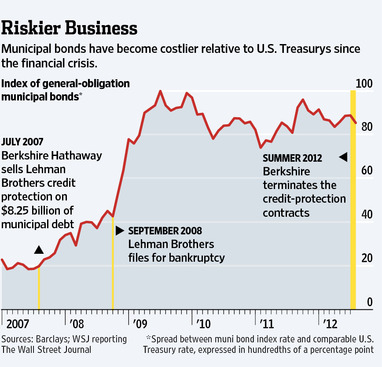 But while traders with huge balance sheets carry paper losses for weeks, months, and years (see JPM’s whale) as there is no fear of margin calls, the fact that Buffett closed out of this position, well ahead of its maturity, on his own is grounds for major concern.

“There is a need for concern,” said Bill Brandt, chairman of the Illinois Finance Authority and chief executive of Development Specialists Inc., which advises troubled cities and companies. “Many of these municipal leaders appear ready to sacrifice bondholders on the altar of the taxpayers rather than the other way around, which has historically been the case.”

Bonds issued by cities generally haven’t affected debt sold by states, but some states have seen credit-rating downgrades in the past five years due to budget problems or economic weakness.

In July 2007, Lehman bought default insurance from Berkshire on bonds from 14 states, including Texas, Florida, Illinois and California, according to a copy of an agreement between the two companies. Lehman paid $162 million to Berkshire, which agreed to pay Lehman if any of the states defaulted on their debt over 10 years. Berkshire essentially bet that total payouts, if any, would be less than the money it received upfront.

“We do believe there will be a selloff because of increased interest rates or because of widening of credit spreads,” Mr. Fuqua said.

And while the termination itself is bad, it could be worse if Buffett had unwound his entire municipal stake. Luckily for what’s left of the US muni market which continues to trade on a hope and a prayer even as local muni and state coffers run dry, Buffett will retain half of his exposure. Not because he wants to, but because he has to.

Berkshire still has swaps tied to roughly $8 billion in debt issued by hundreds of cities, states and municipalities. Those contracts can’t be terminated before the underlying bonds mature between 2019 and 2054, according to the company. Berkshire also was paid upfront for providing this protection, which was purchased by other financial institutions.

Buffett is also quite aware that by selling half of his position, the resulting sell off as piggyback traders jump on the trade, will impair the balance of his positions. And still he has proceeded with the sale. All of which leads us to believe that not only did Buffett just join team Whitney, he has in fact doubled down.