Sep. 12 (Bundesverfassungsgericht ruling on the ESM) is the date to watch!!!

Let’s see if Germany walks its talk, because that would mean the end of the euro.

– Greece Now Prints It’s Own Euros, The ECB Approves, The Bundesbank Nods: No One Wants To Get Blamed For Kicking Greece Out

While Frau Merkel remains beach-bound somewhere, hence the lack of ‘Neins’ recently, her deputy chancellor Michael Fuchs made it unequivocally clear this morning in a Handelsblatt interview that Germany had “reached the limit of its capacity” over additional EFSF payments to Greece and reiterated the double-whammy that the ESM should NOT receive a banking license and that the ECB should NOT act as “money printing press in disguise” by extending emergency loans and bypassing EFSF/ESM. A decision about whether Greece should be given the second tranche of its loan will not be made until October, after the Troika finalizes its first review of the second rescue program in September. However, BNP Paribas notes that there have been a couple of developments worth noting over the past week and more are likely in the coming weeks. 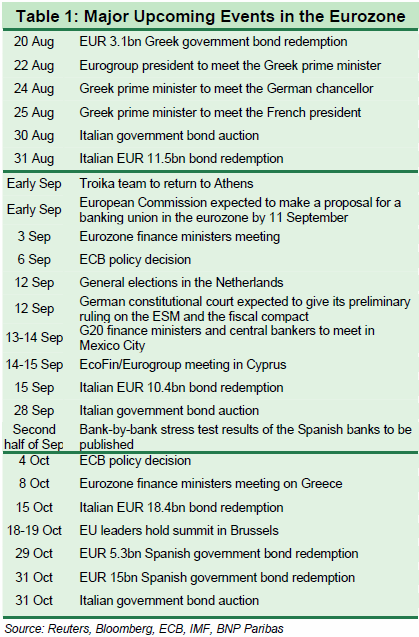 On Sunday 5 August, the Greek government and Troika officials wrapped up the first round of talks during which “great progress” was made, according to IMF officials. The Troika team returns to Athens in early September and the cabinet needs to finalise the details of the EUR 11.5bn of spending cuts for 2013-14 agreed with the Troika, focus on the implementation of EUR 3bn of fiscal measures for this year and discuss an acceleration of privatisation and structural reforms until mid-September.

In the meantime, Greece has gained time by finding a solution to the upcoming EUR 3bn Greek government bond redemption, on 20 August. (These bonds are held by the ECB.) According to Greek officials, Greece will issue extra T-bills this month (note that under the second programme, the plan was Greece to actually decrease the outstanding amount of T-bills this year). An announcement on the amount and details of the issuance is expected on Friday 10 August, but the issuance should enable Greece to meet its funding needs through September.

However, the issue is where the demand for these additional T-bills will come from. In this respect, we see it as no coincidence that, reportedly, the ECB decided to raise the limit on the amount of T-bills the Bank of Greece can accept as collateral from Greek banks by EUR 4bn to EUR 7bn. This will enable Greek banks to receive additional liquidity from the central bank, which can then be used to buy the additional T-bills the government is to issue.

This is clearly an example of monetary financing of the government’s funding needs and is unsustainable. Nonetheless, as a temporary solution, it is a positive development as it will give time to the Troika, to finalise its first review of the programme, and to Greece, to focus on its efforts on catching up with the implementation of its programme to get a positive first review.

…But no reason to get carried away

Although Greek politicians generally seem to recognise that this is the last chance for the country to prove itself suitable to continue to receive funding from the EU/IMF, decision making has not been easy under the three-party coalition government. The Greek prime minister’s view that Greece has to deliver first before it can ask for a renegotiation of the programme is certainly the right attitude. But, Greece has already faced some difficulties in meeting its commitments. First, it took the cabinet longer than expected to agree to spending cuts for 2013-14 before it met the Troika, which delayed the Troika team’s departure from Athens. Second, disagreements among the three party leaders have made it hard to finalise details of EUR 11.5bn of spending cuts this week. According to the Greek finance minister, around EUR 4bn of measures out of EUR 11.5bn still needed to be detailed. One of the measures to fill this gap, the revival of a labour reserve scheme to reduce the public sector wage bill (the scheme, under which 30,000 public sector workers in total were to be placed in a pool, where they earn 60% of their annual salary, was adopted last year, but was soon abandoned), faced strong opposition from the Democratic Left party. Latest news, however, suggest that there is an agreement on the revival of this scheme at the end.

Overall, it seems to us that Greek political developments will be key to watch, as the government’s efforts to meet the demands of the Troika by mid-September still face challenges.

Underlying problems need to be tackled

Thus, the overly optimistic projections of the programme are already off track. This points to a need for some sort of additional help to Greece if the debt-to-GDP ratio is to be deemed sustainable under the IMF’s assessment. In other words, the underlying problems of the programme need to be tackled.

What does this imply? Given the high share of official-sector ownership of Greek debt after the PSI (around 70% of the total EUR 335bn of total public debt by end-2012 – assuming programme disbursements will be made – on our forecasts), we continue to believe that Greece needs some sort of relief from its debt to official creditors. As the IMF loans (EUR 22bn disbursed) have seniority, any potential relief from official sector debt could be on: (i) Bilateral loans from eurozone member states under the first programme (EUR 53bn); (ii) ECB holdings (around EUR 46bn left after redemptions so far); and/or (iii) EFSF loans (EUR 74bn disbursed).

It would be politically difficult to impose a haircut on bilateral and EFSF loans, but the interest Greece pays on these could be lowered as a relief. In this respect, a potential haircut on the ECB holdings, together with the ECB foregoing the interest it receives on old GGB holdings, could be an option. The ECB’s August statement that the ECB is to address “concerns of private investors about seniority” regarding sovereign bond purchases provides some food for thought, in this respect, as it could potentially have implications for Greece.

Another option that could be considered to reduce the stock of debt is to allow the funds Greece has received and will receive from the EFSF for bank recapitalisation (from the total of around EUR 50bn earmarked for bank recapitalisations, Greece has received around EUR 25bn so far. Recoveries, through the sale of bank equity, estimated at EUR 16bn, put the net financial system support at around EUR 34bn) to not go through the government’s account, i.e. a similar treatment to Spain. This alone would lead to around a 17%-of-GDP decrease in the Greek debt-to-GDP ratio. However, any decision on this would need to wait for the ESM to come into effect and be allowed to recapitalise banks directly, after a single supervisory authority is in place.

On potential official sector involvement, the WSJ recently reported that the IMF is already pushing the eurozone governments to reduce the debt burden on Greece and even to consider a debt-to-GDP ratio of close to 100% of GDP by 2020, rather than the current target of 120%.

On the basis of our forecasts for the primary budget balance and real GDP, and using the IMF March forecasts from 2015 onwards (assuming privatisation targets under the programme are reached), the debt-to-GDP ratio should reach a peak of 179% in 2013 and be close to 140% by end-2020. If the new aim is to reduce the debt-to-GDP ratio to 100%, our forecasts show this would imply an overshoot of around 40% of GDP (around EUR 80bn), suggesting that a combination of the above options needs to be considered to reduce the stock of debt.

We continue to believe that a Greek exit from the eurozone would still have significant contagion effects near term, given that a plan for Spain and Italy is unlikely to be spelled out soon and the ECB has yet to work out the details of its potential unconventional policy action ahead. Thus, a decision on Greece will eventually be a political one. Against this backdrop, we stick to our view that, after a very tough renegotiation period, Greece is likely to be given the second tranche of the loan (with more conditionality attached to it) as long as the Greek coalition partners stick together to deliver the Troika’s demands.