If you have high blood pressure, take some medication before reading further.

A basic premise of immigration law is that immigrants to the U.S. are expected to be self-supporting. We obviously don’t want to attract people who have no intention of working, but simply want to benefit from our generous welfare system. This principle is incorporated into the Immigration and Nationality Act, which provides:

But, as in so many other instances, President Obama has simply changed the law by executive fiat. In this case the administration acted quietly, so that it took quite a while before others understood how badly Obama had subverted the immigration laws. Yesterday, four Republican Senators wrote to Janet Napolitano and Hillary Clinton; you can read their letter here:

It has long been a sound principle of immigration law that those who seek citizenship in this country ought to be financially self-sufficient. We were thus shocked to discover that both the State Department and DHS exclude reliance on almost all governmental welfare programs when evaluating whether an alien is likely to become a public charge. Your agencies apply a cramped interpretation of the law in this regard, considering reliance on only two of nearly 80 federal welfare programs as evidence of likelihood of becoming a public charge: Supplemental Security Income (SSI) and Temporary Assistance for Needy Families (TANF).

The Obama administration advertises the fact that anyone is welcome to come to the United States to receive food stamps: 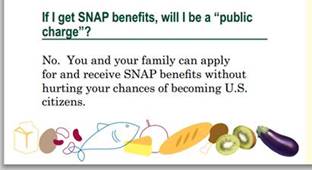 Barack Obama’s mania to make everyone a dependent of the federal government extends even to illegal aliens. The Treasury Inspector General for Tax Administration has uncovered the astonishing fact that the Obama administration pays billions of dollars in child tax credits to illegal aliens: 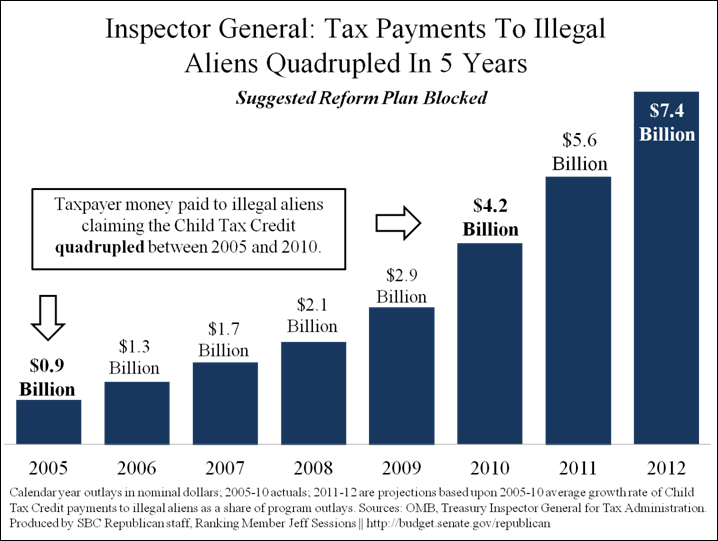 A few tidbits from the IG’s report:

* In one instance, four illegal aliens fraudulently claimed that 20 children lived with them in the same trailer and received from the IRS $29,608 in ACTC refunds. The children claimed did not even live in the U.S.

* The Inspector General recommended that, “Legislation should be considered to require a Social Security Number in order to be eligible for the ACTC, consistent with the requirements for the Earned Income Tax Credit… As it now stands, the payment of Federal funds through this tax benefit appears to provide an additional incentive for aliens to enter, reside, and work in the U.S. without authorization, which contradicts Federal law and policy to remove such incentives.”

Republican Senators proposed such legislation, but Harry Reid refused to allow it to come to the Senate floor for a vote. So at the same time that the United States is going broke, with $16 trillion in debt, we are bribing people from all over the world, illegally as well as legally, to enjoy federal benefits at taxpayer expense. And Barack Obama and Harry Reid refuse to permit anything to be done, even to the extent of limiting blatant fraud.