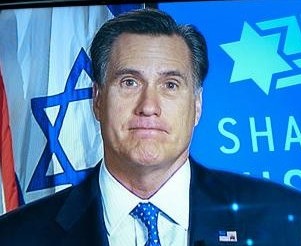 In the first leg of his trip, he angered the otherwise temperate Britons by voicing an unwarranted opinion on London’s readiness for the Olympic games.
His second gaffe soon followed during the now common US presidential campaign pilgrimage to the Wailing Wall in Jerusalem.

During his next international stop, at a closed 50,000-dollar-a-plate fundraiser for Israeli sworn citizens and American donors, he credited Israel’s “providence “and “culture” for the economic disparity between Israelis and Palestinians.

Romney walked out of the small private event with one million dollars for his presidential campaign.
First, the per capita income figures he used bizarrely as a measure of cultural superiority were dead wrong.

Figures from the 2011 CIA World Factbook show that Israel’s per capita income was more than 10 times that of the Palestinians (31,400 versus 2,900 dollars ), not two-fold, as Romney stated.

Second, Israel must have furnished the gullible Romney with the incorrect data to show that Palestinians were doing better under occupation, or else to hide the striking inequality between the two so-called economies.
Being in the one per cent bracket of high US income earners, Romney must have been “provident” at making money and legally evading paying his fair share in income taxes – in 2010 – he paid 13.9 per cent of his income.
But he also comes across as obtuse in his understanding of the work of economic systems.
Economy is defined by various references as a “self-managed social system consisting of labour, capital and land resources involved in production, trades, distributions and consumption of goods and services” in a defined region.
The loss of control of any of these economic levers compromises sovereignty over the economy.
Israeli occupation policies inhibiting the development and operation of the fledgling Palestinian market have been the subject of many protests, including the European Union, World Bank institutions and UN and human rights bodies.
Speaking at a UN seminar in February, UN Secretary-General Ban Ki-moon said Israeli “settlements and their infrastructure severely restrict access to land and natural resources by the Palestinian people”.

The Israeli occupation has turned the Palestinian entity into a consumption economy, contributing directly to Israel’s economic prosperity.

Bluntly speaking, it came as no surprise to hear a racist remark from a disciple of the Church of Latter Day Saints which until 1978 did not allow black people to attend its services.
I had my encounter with this church’s teaching when several years ago a colleague shared with me the Book of Mormon.
I was astonished to discover that I, like the Lamanite tribe in the book, had a dark skin curse mark from God.
Romney’s dullard per capita gauge of superiority is, nevertheless, self-defeating.
In retrospect, every culture has enjoyed affluence while others, including within the same culture (e.g. East and West Germany, North and South Korea) did not.
In terms of economic ranking, Germany comes higher than Israel on Romney’s cultural benchmark. But, fortunately, Germany does not have wealthy donors motivated by a desire to manipulate US foreign policy and enticing Romney to come drivelling to Berliners on their superior culture.
But who knows? Romney could turn out to be a real pioneer. His Jerusalem fundraising broke a long held American taboo against seeking foreign money in US elections. Following his successful outsourcing career, fundraising in foreign capitals could become the new frontier in US presidential campaign financing.