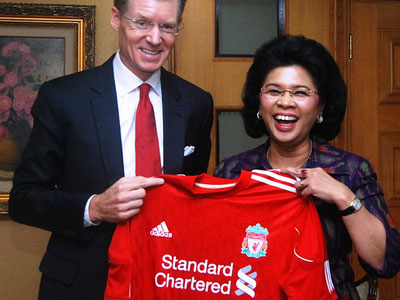 Today the New York State Financial Authority accused UK investment bank Standard Chartered of having facilitated $250 billion worth of transactions on behalf of Iran (you can download the full complaint here).

We identified the most shocking details here, but one line stands out and is probably going to end up being a Wall Street Classic

To set the scene, in 2006, the New York branch of Standard Chartered allegedly grew concerned about the amount of Iran business the bank was doing.

The folks in London were underwhelmed to say the least.

(From the complaint) here’s what New York said to London:

7… By 2006, even the New York branch was acutely concerned about the bank’s Iran dollar-clearing program. In October 2006, SCB’s CEO for the Americas sent a panicked message to the Group Executive Director in London. “Firstly,” he wrote, “we believe [the Iranian business] needs urgent reviewing at the Group level to evaluate if its returns and strategic benefits are . . . still commensurate with the potential to cause very serious or even catastrophic reputational damage to the Group.” His plea to the home office continued: “[s]econdly, there is equally importantly potential of risk of subjecting management in US and London (e.g. you and I) and elsewhere to personal reputational damages and/or serious criminal liability.” — Page 4

And here’s how London responded:

8. Lest there be any doubt, SCB’s obvious contempt for U.S. banking regulations was succinctly and unambiguously communicated by SCB’s Group Executive Director in response. As quoted by an SCB New York branch officer, the Group Director caustically replied: “You f—ing Americans. Who are you to tell us, the rest of the world, that we’re not going to deal with Iranians.” — Page 5

Tell us how you really feel…