We got the pre-spun job quantity data already, where we learned that nearly 3 times the headline print was due to seasonal and B/D adjustments and is thus nothing but noise. Now we get the quality. As can be seen below, courtesy of Table A9 from the Household Survey, in July the number of part-time jobs added was 31K, bringing the total to 27,925, just shy of the all time record of 28,038. Full time jobs? Down 228,000 to 114,345,000 lower than the February full-time jobs print of 114,408,000. Once again, more and more Americans are relinquishing any and all benefits associated with Full Time Jobs benefits, and instead are agreeing on a job. Any job. Even if it means working just 1 hour a week. For the BLS it doesn’t matter – 1 hour of work a week still qualifies you as a Part-Time worker. 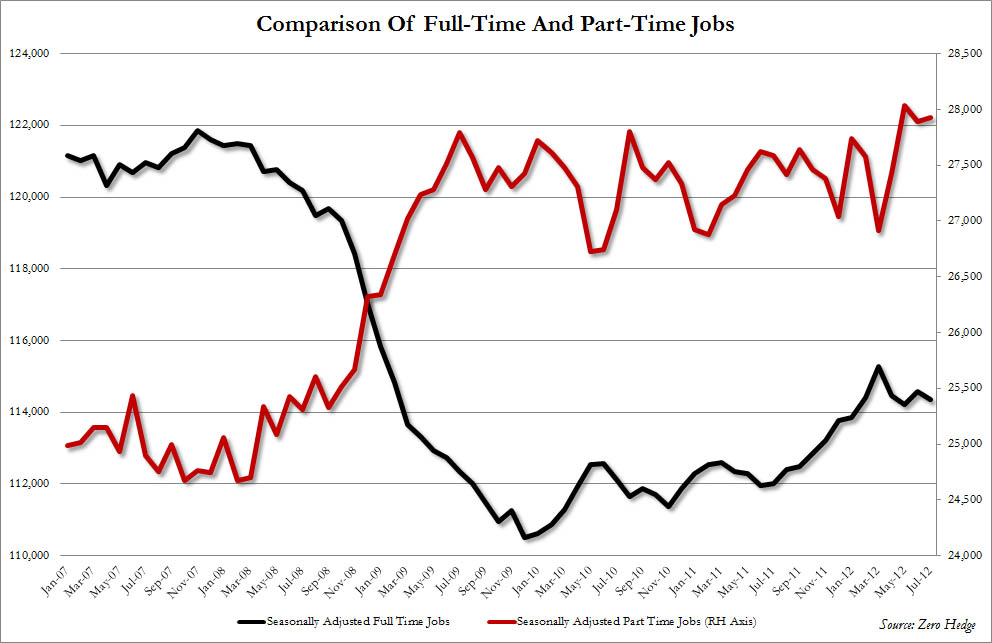 The US economy added 163,000 jobs in July, and the unemployment rate grew to 8.3 percent, the Labor Department reported on Friday. Although the number of jobs created was the most in five months, and higher than had been expected, it was barely enough to keep up with population growth.

The headline figure of jobs created, however, was contradicted by the rise in the unemployment rate, which is based on a different survey. According to this separate survey, the total number of officially unemployed people in the US actually rose to 12.8 million last month. The number of people with a job fell by 195,000, and the number of unemployed grew by 45,000.

A rise in the unemployment rate can sometimes reflect an increase of rise in the number of people looking for work, which causes them to be categorized as officially unemployed. However, according to the government figure, the number of people in the labor force fell by 150,000, and the employment-population ratio fell by 0.2 percentage points, to 58.4. Thus, unemployment rose even as tens of thousands of people gave up looking for work and therefore are no longer counted as unemployed.

The “real” unemployment rate, referred to as the “U6,” which includes those working part-time for economic reasons and those who have given up looking for work, hit 15 percent of the workforce. The figure has been growing steadily since April, when it was 14.5 percent.

These apparently contradictory figures—an increase of 163,000 jobs combined with a sharp decline in the number of people employed—is in part due to the fact that the two numbers come from different surveys. In any case, they are evidence of a job market that is extremely weak at best.

Obama responded to the jobs report with his usual refrain about economic “recovery,” saying, “We haven’t had to come back from an economic crisis this deep or this painful since the 1930s.” He added, “But we also knew that if we were persistent, if we kept at it and kept working, that we’d gradually get to where we need to be.”

Despite Obama’s assurances, the latest jobs report, which looks decent only in comparison to the total stagnation of the past three months, reveals yet again that there has been no economic recovery for the working people of the United States. The American ruling class, led by Obama, sees the jobs crisis as an opportunity to intensify the attack on the working class.

Perhaps the most disastrous figure in the Labor Department report was the fact that hourly earnings for production and nonsupervisory workers grew at their lowest level in figures dating back to 1965.

Wages grew by only 1.3 percent over the course of the past year, compared to a 1.7 percent increase in consumer prices, meaning that real wages fell by a third of a percent in the past year. This figure masks even sharper declines for broad sections of the working class.

The manufacturing sector added 25,000 jobs, while business services added 49,000. Education and healthcare added 38,000, while 27,000 jobs were added in leisure and hospitality. The building sector lost 1,000 jobs.

Long-term unemployment continues at near record highs. There were 5.2 million people unemployed for 27 weeks or more, amounting to 40.7 percent of the unemployed. The average duration of unemployment remained essentially unchanged at 38.8 weeks, near the record high of 40.9 in November. The number of people working part-time for economic reasons likewise grew by 36,000 in July, hitting 8.25 million.

The mediocre jobs report comes amid a slew of negative economic data, both within the US and globally. The Institute for Supply Management said Wednesday that its US manufacturing index hit 49.8 in June. While a slight improvement from the month before, it indicates a contraction of manufacturing, and fell short of economists’ predictions.

The manufacturing sectors in China and India likewise slowed in July, and Japan had its worst manufacturing reading since last year’s tsunami. In a separate report, Taiwan said its economy contracted in the second quarter of the year.

The US economy now produces more output than before the start of the downturn, but with 4.7 million fewer jobs. This is because employers have used the desperate conditions in the labor market to impose speedups and slash wages.

Obama responded to the jobs report by reiterating cuts to the public sector were to blame for the continuing economic slowdown, conveniently neglecting to mention the fact that his administration has overseen more public sector job cuts than any in history.

Since Obama took office, 648,000 state, local, and federal government jobs have been eliminated. By contrast, the Reagan administration actually added 24,000 government jobs during its first four years in office.

Obama and his rival Mitt Romney used the publications of the jobs figures to trade political jabs at each other over the state of the economy. However, the two candidates of big business are united in their goal of driving up corporate profits through austerity, wage-cutting, and mass unemployment.

Tellingly, neither candidate used the jobs report to comment on the scheduled expiration of extended unemployment benefits, which are due to lapse completely at the end of this year. In recent months, millions of long-term unemployed in state after state have been cut off of extended unemployment, which is distributed by the states but funded by the federal government.