Not just one generation will be thrown into poverty. 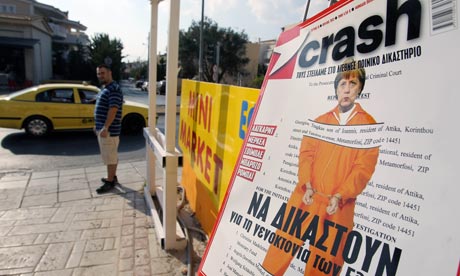 In Athens, Angela Merkel is seen handcuffed on the cover of the magazine Crash. The headline demands that European leaders be ‘tried for genocide of the Greeks’. Photograph: Thanassis Stavrakis/AP

While Rome burned, Nero put on fancy dress, stood on a tower and played his lyre. He sang of the Sack of Ilium and roasted Christians at the stake to light up his party. The people were taxed to pay for his extravagance, but he appeased them with games of ever increasing spectacle and sadism. He clad slaves in deerskins and had lions eat them. It was immensely popular. When Nero duly fell from grace and committed suicide, he cried: “What an artist dies in me.”

I like the Olympics now that athletes have taken over from fatcats on centre stage, but the media coverage is disproportionate, idiotic and Orwellian. Never has the BBC in particular purveyed such nationalistic opium to the people. Is it really necessary to ignore all news of the city burning for the duration?

Last weekend a small island off the coast of Schleswig-Holstein saw the American treasury secretary, Tim Geithner, and the German finance minister, Wolfgang Schäuble, attempt a feat as yet unknown to the Olympics. It is called “save the euro”. This marathon is being played simultaneously and in real time by bankers and politicians in all Europe’s capitals, while a claque shouts “two weeks to save the euro” over and over again.

I have a stack of “two weeks to save the euro” cuttings dating back to early 2010. It is a morgue of daft subjunctive journalism. Every known disaster “could” be about to happen. Germany “may decide” not to bail out Greece. Spain “may need” a bailout, or the euro “could” be heading for the rocks. According to this week’s Economist, yet another Athens visit by the EU’s José Manuel Barroso means a Greek exit from the euro “could occur within weeks”. Of course it could, or not.

The euro has been on the brink of collapse “unless” certain measures were taken for two years. The measures were not taken, but the euro has not collapsed. It is a classic case of crying wolf. This week the head of the ECB and the leaders of Germany and Italy all asserted that they will “do everything” to save the euro, “whatever it takes”. The grammar implies that this is their responsibility, thus relieving Greeks, Spaniards or Italians of any moral hazard. Everyone keeps frothing at the mouth but the euro does not change.

Something else changes. A prolonged and severe austerity is in place across Europe, intended to save the loans of banks and protect them from sovereign default. To save the eurozone, Europe must endure apparently perpetual recession, including the economic enslavement of most Mediterranean countries to what is for them an overvalued currency. Those such as Greece, Italy and Spain are being frogmarched into becoming provinces of northern Europe. They are being expected to converge into one political economy, each to compete with German productivity on equal terms. Since this will not happen in our lifetime, the reality is that they will be plunged deep into poverty, relieved by occasion and desperate bailouts from Berlin and Brussels.

Saving the common currency in its present form means that a fifth of the population of Greece and Spain are now unemployed. This is awful. The policy is not making workers more efficient, it is making them not work. It is an attack by economics on society of Neronian savagery, one unequalled in intellectual vacuity since the gold standard and the Great Depression.

The policy backwash is affecting even Britain, this week told it faces triple-dip recession, whatever that is. There is no point to this. The confidence that the policy is supposed to inject into the Spanish and Italian bond market is glaringly absent. The growth it is supposed to restore is absent too. Europe outside Germany is wallowing in a liquidity trap, starved of cash in circulation. Even Germany must soon run dry of outlets for its goods.

Conventional liberal wisdom remains that the euro must be saved, at whatever cost. It is liked for being a grand idea. It is liked for merely existing. It is liked for what might happen if it did not exist. In an extraordinary speech last week, the leader of Europe’s central bank, Mario Draghi, compared the euro to a bumblebee. It was so badly designed that scientists could not see how it flew, yet it had flown for years and should now “graduate into a real bee”. This bizarre evolution, said Draghi, required “more Europe not less”, by imposing more austerity on southern states in the interest of northern banks (though he was not this explicit). They had to cede their sovereignty “to fiscal, financial, economic and political union”.

How much longer will aloof eurocrats believe such things will ever happen? On the evidence of the past two years, the euro will stumble on, but it is hard to see how Greece and Spain can remain in it without huge transfers from Germany and others, transfers which German voters clearly find intolerable – 70% of Germans want a “Grexit” from the euro, and half want rid of the euro itself. Sooner or later someone will have the guts to admit that pressure on the core eurozone would greatly ease if Greek and Spanish debts could be restructured, and their currencies devalued outside the euro.

This so-called crisis is being run by and for banks. They were burned by the credit crunch, by their own reckless lending to a housing bubble and to spendthrift governments. Declaring themselves too big to fail, they demanded policies whose sole virtue was to see their loans secured, at whatever cost to the European economy. They do not want a collapse of even a part of the euro, as that would jeopardise their balance sheets.

Like established power down the ages, political leaders are imprisoned in fighting old wars with dodgy allies. European policy is still spooked by the ghost of 1970s inflation, a ghost the euro under German leadership was supposed to exorcise. As it is, politicians dare not stimulate demand, boost consumption or expand employment. They dare not inject real liquidity into the real economy. They take advice from banks, but that advice is to bail out banks, directly or indirectly. They behave as if they alone hold the golden key to Europe’s recovery, but they don’t.

European leaders are in thrall to the profession of high finance. They are ruling a continent now in a recession whose depth and longevity does not seem to concern them. They are devastating an entire generation of Europeans and for no good reason. People may love circuses, but soon or later they will demand bread.