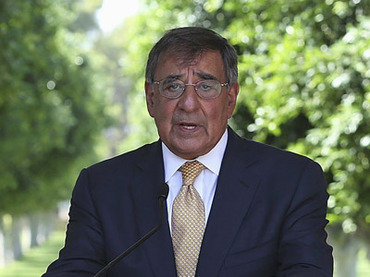 US Defense Sec. Leon Panetta has advice for Syria’s President Assad: “If you want to be able to protect yourself and your family, you’d better get the hell out now.” Panetta also warned that the US would not repeat the mistakes it made in Iraq.

“The United States and the international community has made very clear that this is intolerable, and have brought their diplomatic and economic pressure on Syria to stop this kind of violence, to have Assad step down and to transition to a democratic form of government,” he said in an interview with CNN during a visit to Tunisia.

The international community has yet to reach consensus on the ongoing strife in Syria. Russia and China oppose removing Assad, saying his government is supported by a majority of Syrians.

Syria’s government forces should remain intact after embattled President Assad is ousted, said Panetta. Though the Obama administration is resolved against military intervention in the country, Panetta nevertheless drew a comparison with the occupation of Iraq following the 2003 US-led invasion.

“It’s very important that we don’t make the same mistakes we made in Iraq,” he said, referring to the Bush administration’s decision to disband the country’s military in the wake of the invasion. “I think it’s important when Assad leaves, and he will leave, to try to preserve stability in that country.”

The Defense Secretary said that the most effective way to preserve Syrian stability is to “maintain as much of the military and police as you can, along with security forces, and hope that they will transition to a democratic form of government.”

A temporary military regime is a strategy similar to the one employed by Egypt following the ouster of President Mubarak in January last year, where the Supreme Council of Armed Forces (SCAF) formed an interim government. But prolonged military rule sparked massive protests amid claims that SCAF was stalling democratic elections in a bid to cling to power.

Government forces will be essential to securing key Syrian military sites, including alleged chemical weapons stashes: “It would be a disaster to have those chemical weapons fall into the wrong hands,” Panetta said.

“The key right now is to continue to bring that pressure on Syria, to provide assistance to the opposition, and to provide whatever kind of humanitarian aid we can to assist the refugees,” he told CNN.

Panetta is currently in Tunisia as part of a week-long tour of the Middle East, during which the Syrian conflict will be at the top of his agenda.

This aggressive rhetoric comes as the fighting between government forces and rebels intensifies across Syria. Clashes have wracked the industrial hub of Aleppo for the past week, with rebels vowing to turn the northern city into the “grave of the regime.”

The Obama administration has said that it is providing as much “non-lethal” aid as it can to Syrian rebel forces. Russia has accused the West of fueling the conflict by supporting the opposition, claiming that more should be done to facilitate dialogue between the warring camps.