Barack Obama’s White House has been forced to admit that it did return a bust of Sir Winston Churchill to British diplomats, after describing such claims as “100 per cent false”. 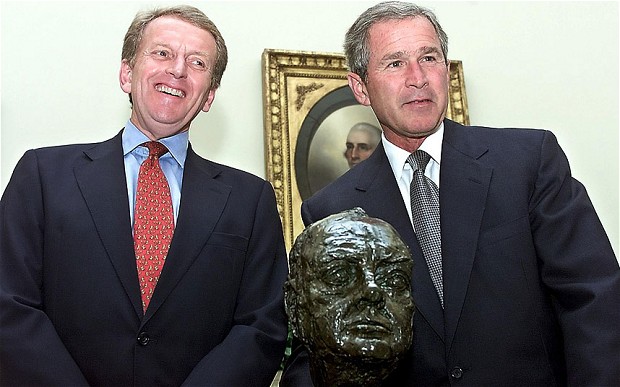 US President George W. Bush (R) smiles after receiving a bust of Sir Winston Churchill from British Ambassador to the US Christopher Meyer at the Oval Office of the White House in Washington, DC 16 July 2001 Photo: AFP/GETTY

Aides to Mr Obama were furious after The Daily Telegraph disclosed last week that Mitt Romney planned to restore the Jacob Epstein sculpture to its home under George W Bush from 2001 to 2009.

“I’m looking forward to the bust of Winston Churchill being in the Oval Office again,” the Republican challenger confirmed at a fund-raiser at London’s Mandarin Oriental hotel.

Dan Pfeiffer, the President’s communications director, said in a statement that widespread reports of the bust being returned to Britain’s embassy in Washington as Mr Obama took office were untrue.

“This is 100 per cent false,” Mr Pfeiffer said. “The bust is still in the White House. In the Residence. Outside the Treaty Room”. Illustrating his statement with a photograph of Mr Obama inspecting it with David Cameron in 2010, he added: “Hopefully this clears things up a bit and prevents folks from making this ridiculous claim again”.

British officials were surprised by Mr Pfeiffer’s statement and photograph, however, because the bust now resides in the residence of Sir Peter Westmacott, Britain’s ambassador to the US. Further inquiries led to the discovery that there are, in fact, two matching Churchill busts by Epstein.

The one displayed by Mr Bush was indeed returned, along with all other art lent to him, as his presidency came to an end. The other, which remains in the White House residence, was given as a gift to President Lyndon B Johnson in 1965 by a group of Atlanticist diplomats and military officers.

In an update to his statement, a defiant Mr Pfeiffer stressed that the notion Mr Obama had returned a bust “because of antipathy towards the British” was “an urban legend”.

A spokesman for the British ambassador agreed. “Both President Obama and the Prime Minister have repeatedly underlined that our two countries remain the closest of allies.”