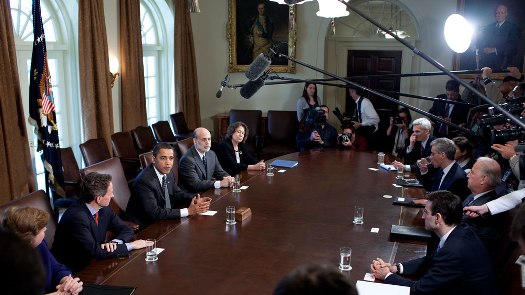 – The Audit The Fed Bill Gets Passed By The House But Obama And The Democrats Are Going To Kill It (The Economic Collapse, July 25, 2012):

On Wednesday, Ron Paul’s bill to audit the Federal Reserve was overwhelmingly passed by the U.S. House of Representatives.  The vote was 327 to 98.  You would think that a bill with such overwhelming support would easily become law.  But it won’t, because Barack Obama and the Democrats plan to kill it.  Senate Majority Leader Harry Reid has already said that the Senate will not even consider the bill.  But of course if Barack Obama called Harry Reid and told him that he wants this bill to get through the Senate so that he could sign it then Harry Reid would be singing a much different tune.  Sadly, we all know that is not going to happen.  Barack Obama’s good buddy Ben Bernanke called the Audit the Fed bill a “nightmare scenario” last week, and Obama is certainly not going to do anything to upset Bernanke – especially this close to the election.  Obama needs Bernanke to do everything that he possibly can to stimulate the economy so that Obama will look as good as possible in November.  The sad truth is that there is absolutely no chance that the Audit the Fed bill will become law and that is a crying shame.

So why is an audit of the Federal Reserve so important?

Well, perhaps it is because there has never been a true comprehensive audit of the Federal Reserve since it was created back in 1913.

The Federal Reserve has more power over the economy than anyone else in the country does, and yet they are virtually unaccountable and the American people have very little idea what has been going on behind closed doors over at the Fed for the past 100 years.

A very limited audit of the Fed that was passed a couple of years ago that examined transactions during the last financial crisis discovered that the Federal Reserve had actually loaned out more than 16 trillion dollars in nearly interest-free money to the “too big to fail” banks between 2007 and 2010.

Keep in mind that U.S. GDP for the entire year of 2011 was only slightly more than 15 trillion dollars.

The Federal Reserve loaned out trillions upon trillions of dollars to their friends and never told the American people about it.

You would think that Congress would be quite eager to see what else has been going on over at the Federal Reserve.

But instead, many Democrats are completely and utterly opposed to auditing the Fed any further.

U.S. Representative Barney Frank (a Democrat) seemed to regard the bill as a joke even after it overwhelmingly passed in the House.  Frank stated that “nobody here thinks this will ever become law“.

According to Politico, there is zero chance that the bill will get through the U.S. Senate….

Senate Majority Leader Harry Reid (D-Nev.) has said the Senate will not consider the bill, effectively killing its chances of becoming law.

But we all know that if Obama wanted this bill to become law that it would be a done deal.

If Barack Obama came out tomorrow in front of the television cameras and declared his support for this bill it would sail right through the Senate.

Unfortunately, the Obama administration has made it very clear that it considers a comprehensive audit of the Federal Reserve to be a really, really bad idea.

For example, Treasury Secretary Timothy Geithner once stated that auditing the Fed is a “line that we don’t want to cross” and that if we did audit the Fed it would be “problematic for the country”.

So what exactly did he mean by that?

In any event, people should take this as an opportunity to confront Barack Obama about the Audit the Fed bill wherever he goes.

Perhaps Obama will prove me wrong.

Perhaps Obama will show that he is willing to stand up to the Federal Reserve.

In fact, if Obama gets this bill pushed through Congress and signs it into law, I will not criticize him for an entire month.

But we all know that will never happen.

The Federal Reserve is going to be able to continue to keep their secrets hidden from the American people.

The following is what Ron Paul had to say following the vote on Wednesday….

“I think the whole idea that they can deal in trillions of dollars and know that nobody is allowed to ask them a question is a moral hazard.”

And Ron Paul is right.

If the Federal Reserve can zap trillions of dollars into existence out of thin air and loan that money to their friends at the big banks and to central banks in other countries, then it should not be too much to ask them to be accountable to the American people.

Over the coming months, the American people will heatedly debate whether Barack Obama or Mitt Romney would be better for the U.S. economy.

But the truth is that the Federal Reserve has far more power over the U.S. economy than the president of the United States does.

The Federal Reserve has been called the “fourth branch of government” because of how much power it has.  The Federal Reserve sets our interest rates, it determines the level of our money supply, it regulates and secretly bails out our banks, it determines the “target rates” for unemployment and inflation, and every small move the Fed makes causes global financial markets to swing wildly.

The Federal Reserve does all of this without ever having to be accountable to the American people.  In fact, whenever a bill is introduced that would shed some light on their activities they whine and cry about how important their “independence” is.

In a previous article, I described how preposterous this all is….

The American people need to stand up and demand an audit of the Federal Reserve.

We deserve to know what is going on over there.

Sadly, the mainstream media makes it sound as if hell has a better chance of freezing over than this bill does of becoming law.  The following is from a USA Today article that was posted on Wednesday….

The bill stands no chance of becoming law because the Democratic-controlled Senate will not take it up. The vote, however, served as a symbolic swan song for Paul, who is not seeking re-election. It is also an indicator of how Paul’s economic views have gone more mainstream, particularly within the Republican Party, in the wake of the 2008 financial crisis that shook Americans’ confidence in Wall Street and the federal government.

Well, let us hope that this kind of a bill keeps getting introduced in Congress.

Perhaps someday we actually will get a real audit of the Federal Reserve.

When that happens, the following is a list of questions that I would like to see asked by those auditing the Fed….

If the Federal Reserve is supposed to prevent shocks to our economy, then why have there been 10 different economic recessions since 1950 and why are we about to enter another one?

Was the Federal Reserve involved in the manipulation of Libor?

What role did the Federal Reserve playing in creating the housing bubble that resulted in an unprecedented housing crash?

Why is the Federal Reserve paying U.S. banks not to lend money?

Why did Barack Obama nominate Ben Bernanke for a second term as head of the Federal Reserve when Bernanke has a track record of failure that makes the Chicago Cubs look like a roaring success?

Why is the U.S. national debt more than 5000 times larger than it was when the Federal Reserve was created in 1913?

Why were the Federal Reserve and the personal income tax both pushed through Congress in the same year in 1913?

Why does the Federal Reserve argue that it is “not an agency” of the federal government in court?

Why do all 187 nations that belong to the IMF have a central bank?

Do you have any other questions that you would like to have asked during an audit of the Federal Reserve?  Please feel free to post a comment with your thoughts below….