When you can’t act, you talk. Sure enough, here we go again:

And of course the weak hands cover until they realize Draghi just said absolutely nothing, as at this point everything is in Germany’s hands. And not only has Germany not said anything, and won’t until September when the constitutional court will approve or deny the ESM, but in fact they have been saying overnight that Spanish bonds are not eligible for EFSF purchases. In the meantime, Europe has devolved from a continent of coordinated action to coordinated jawboning.

Take home: poor Draghi can’t even afford Hilsenrath and has to force EURUSD squeezes himself. Because both he and Bernanke know that all they can do is talk the markets up. Any actual event is now grounds for selling the news.

In the meantime, here is the market reaction in a world in which nothing matters any more except what hollow words comes out of broke central planners’ mouths:

A quick Reuiters summary of what was said:

European Central Bank President Mario Draghi pledged on Thursday to do whatever was necessary to protect the euro zone from collapse, including fighting unreasonably high government borrowing costs.

“Within our mandate, the ECB is ready to do whatever it takes to preserve the euro. And believe me, it will be enough,” he told an investment conference in London.

“To the extent that the size of the sovereign premia (borrowing costs) hamper the functioning of the monetary policy transmission channels, they come within our mandate.”

The euro rose and German bond futures turned negative after the comments. 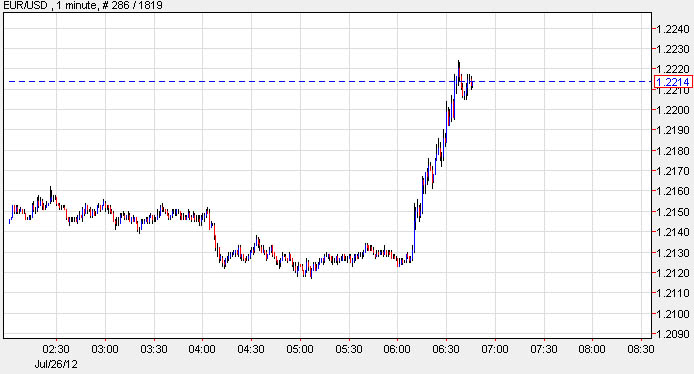