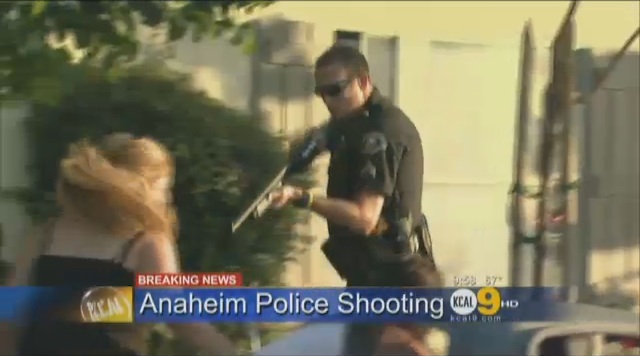 The video below marks a new low in police conduct. The final horrific incident on display allegedly was sparked by the suspicious killing of a man who witnesses say did nothing more than turn to run from police.

After “an unruly crowd” — as the reporter below conveniently states — gathered to ask questions and express anger at what was perceived to be a senseless killing, the officers further proved that those who were gathered had valid concerns about their local police force. In response, police quickly opened fire with rubber bullets, and even set a dog loose on a woman with a baby stroller. The woman was able to grab her baby before the dog arrived, but she was slightly injured, while a man can be seen in the video having his arm bitten.

Police brutality videos are legion, with many of the worst, such as the infamous torture killing of Kelly Thomas, carrying “age restricted” notices (the one below is now included). This restricted notice in many cases restricts them from going viral, even though other scenes of violence classified as “entertainment” are readily available.

This story is still developing and is under investigation, but a very strange aspect to it is mentioned by the reporter in the final moments of the video: witnesses are claiming that Anaheim officers were offering to buy the cell phone footage that some people captured.

It is up to anyone appalled by these actions to inform whomever they can that life in America continues to degenerate at an alarming pace. Police are being trained to see the American people as a threat first, and as citizens of a Constitutional Republic a very distant second. We must be prepared to demand that our local law enforcement use the utmost restraint, and punish those who have offended the honor and duty of what it means to protect and serve. In the meantime, local residents are being urged to take action by protesting in front of the Anaheim Police Department — a large group is taking shape on their Facebook Event Page HERE.

Additional sources and updates can be found by clicking “read more” below.  Please include your own links in the comment section to help people stay informed.

Here are additional sources – some with video footage. News anchors say angry witnesses to the deadly shootout started throwing rocks and bottles – but that is not seen in the YouTube video which takes place during day. Another point worth noting is that some of the mainstream news sources are emphasizing that these were non-lethal rounds being shot, but how could the crowd be aware of that … especially children?

Watch as this situation continues into the evening:

Later on in the evening residents continued to protest, lighting a dumpster on fire and blocking the as can be seen in the video below:

Here’s footage of police rolling to the scene (which gives you a sense of scale of the response) later that evening:

Here’s video of about 50 protestors storming the Anaheim police station. A dispatch is forthcoming… (Source)

Cops shooting unarmed and oftentimes innocent suspects has been an ongoing and systemic issue in Anaheim. Perhaps the grieving residents simply had enough! That’s what it looks like on the Facebook page above.

Here is an article delving into disturbing previous incidents of police slaughter: http://www.ocweekly.com/2012-06-21/news/caesar-cruz-anaheim-police-department/