Last week when we wrote about the imminent default of Sicily which Mario Monti tried to sweep under the rug by demanding the local governor resign for not masking the situation with lies, and doing all he can to prevent the advent of reality, we noted, rather sarcastically, that the “resignation of Sicily Governor Lombardo will somehow allow all those who care about the fundamentals of Italy to stick their heads in the sand… at least until Sicily is followed by Calabria, Campania, Lazio, Abruzzo, Tuscany, Lombardy, Umbria, Liguria, Veneto and so on. At least the governors of those respective provinces now have an advance warning what the endgame is.” Sure enough, now that this particular floodgate has also been opened, it is only fitting that in the aftermath of this weekend’s main news that a total of 6 Spanish regions will demand bailouts, that Italy follow suit with its own blacklist, and as La Stampa has reported, there are now ten major Italian cities at risk of an imminent financial collapse, yet another factor pushing Italian yields well on their way to the country’s own 7% rubicon, now at 6.34%. 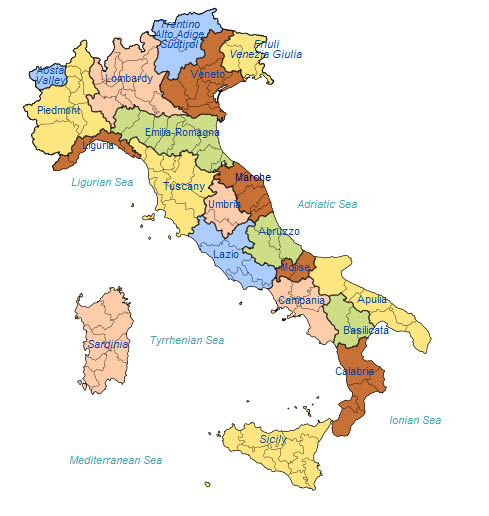 There are ten major Italian cities with more than 50 000 inhabitants, who are a step away from the crash.

Naples and Palermo at the top of the “black list”, although a task force for weeks at Palazzo Chigi is doing everything possible to avoid the worst.

Then Reggio Calabria, finished in red already in 2007-2008 and is now being investigated by the judiciary. And then so many other governments, large and small (like Milazzo), perhaps far virtuous, could be forced to ask for the “collapse”, which means dissolution of the council, entrance of the Court of Auditors and prefectural commissioner.

The last shot, or if you want the coup de grace, it is to come: it is a provision inserted in the decree on the spending review that in the folds of the new rules that impose the “harmonization of accounting systems and financial statements” requires to devalue the 25% of the residual assets accumulated to date. These revenues accounted for but not yet cashed, as may be the proceeds of fines and waste tax.

Key figures, which serve to “make” the budget of an institution that often, in practice, these voices swells while knowing they will not be able to collect 100% of the amounts to be budgeted. Proceeds often very short questions, which now can no longer serve to make ends meet.

“At risk are at least a dozen large cities’ trust in the government technicians who are monitoring the situation.

“The situation is becoming more difficult every day,” confirms the president of ANCI Graziano Del Rio. Pointing the finger at yet another cut in transfers, against the measures introduced by the spending review, and that raises the alarm of many fellow mayors. “

Because he who defaults first, always defaults best… and first.