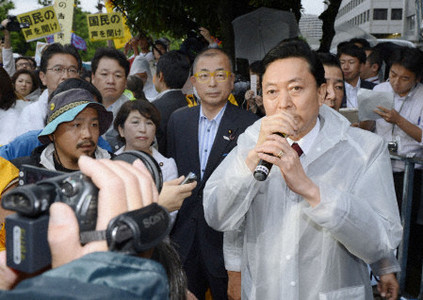 In an unusual move by a former prime minister, Democratic Party of Japan heavyweight Yukio Hatoyama joined an antinuclear rally on a street in front of the prime minister’s office in Tokyo on Friday, saying he believes it is premature to reactivate nuclear reactors in the country.

With a microphone in his hand, Hatoyama said, “I must play a role to change the political trends by conveying people’s voices to the prime minister’s office as a former prime minister.”