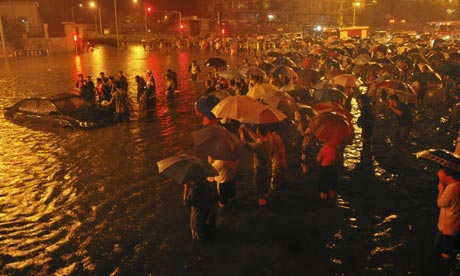 Rescuers and residents stand next to a stranded car being pulled up from a flooded street under the Guangqumen overpass in Beijing. Photograph: Joe Chan/REUTERS

The storm, which started on Saturday afternoon and continued late into the night, flooded major roads and sent torrents of water tumbling down steps into underpasses.

In the suburb of Tongzhou, two people died in a roof collapse and another person killed was struck by lightning, the official Xinhua news agency reported.

Other deaths were caused by electric shocks from downed power lines and drowning, it added.

More than 500 flights were cancelled at the Chinese capital’s international airport, the Beijing News said.

However, the subway system was largely unaffected, aside from being swamped with people desperate to get home and unable to use cars, buses or taxis.

The Beijing city government said on its website it was working to get the metropolis back on its feet, but reminded people to prepare for further bad weather.

“The weather forecasters say that from late July to early September this city is prone to flooding, and there could be further large-scale storms or extreme weather,” it said.

Many residents took to China’s popular microblogging site Sina Weibo to post dramatic pictures of the storm. Some complained the city should have been prepared, especially since the government had issued a severe storm warning the day before.

“It was forecast early on that Beijing would get torrential rain, so why were pumps and other facilities not prepared in time?” complained one user.

But at least one good result came from the storm. The official pollution index, which had showed an unhealthy rating before the storm hit, registered “excellent” on Sunday, with the air noticeably free of its normal acrid smell.