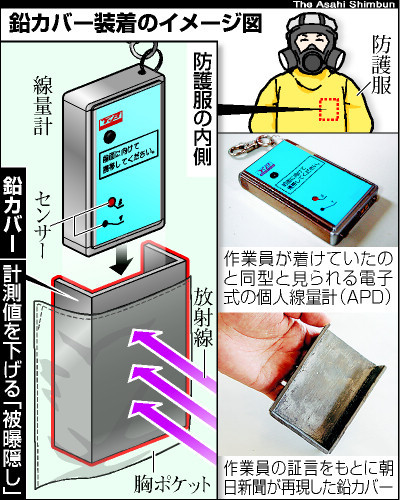 An executive from a Tokyo Electric Power Co. subcontractor tried to force its workers at the crisis-hit Fukushima Daiichi nuclear power plant to cover their radiation monitoring meters with plates made of lead in an apparent attempt to underreport radiation exposure, sources close to the matter said Saturday.

The executive in his 50s, who works for a company based in Fukushima Prefecture, told around 10 plant workers to attach the plates to the alarm pocket dosimeters that the utility known as TEPCO had provided them with to monitor their radiation exposure, the sources said. The ministry of Health, Labor and Welfare has started investigating the matter.

The workers were hired for about four months through last March to wrap pipes at a water treatment facility with heat insulators.

July 21, 2012 report in the Asahi Shimbun with summarized translation by Fukushima Diary:

Fukushima workers were ordered to shield their dosimeter with lead covers to make the integral dose look lower than actual.

Some of the workers admitted they covered the dosimeters with lead cases in the interview with Asahi newspaper.

On 12/1/2011, 10 of the workers were ordered to shield the dosimeters called APD, but 3 of them rejected it. In the evening of 12/2/2011, those workers and 3 managers had a discussion at the hotel, where they used as lodging house. The workers recorded the conversation by mobile phone to publish the fact that they were to shield their dosimeter. The manager (54) who gave them order is denying the contents of recorded conversation. He’s denying that he ordered them to shield or some of the workers actually covered it with lead case.