A Russian ship carrying refurbished attack helicopters destined for Syria has weighed anchor from its Arctic port for a second time after failing to deliver the cargo last month. 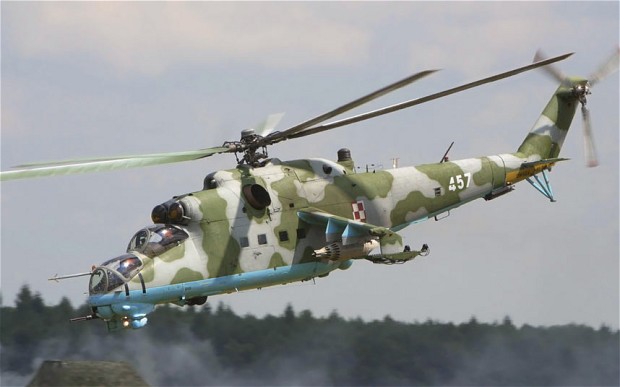 The Alaed’s previous attempt to convey the Mi-25 gunships to the regime of of President Bashar al-Assad under a Curaçao flag caused anger in London and Washington. US Secretary of State Hillary Clinton said the aircraft would be used to kill innocent civilians.

The ship’s new destination is unclear but maritime data show it was travelling south off Norway on Thursday and is due in Baltiysk on the Baltic coast of Kaliningrad, Russia’s exclave between Poland and Lithuania, on July 17.

A spokesman for Femco, the Russian company which owns the cargo vessel, said on Friday that it would arrive in St Petersburg two days later and may then head to the Russian Far East.

Moscow has insisted it will deliver the Mi-25 helicopters in the teeth of western disapproval and it appears likely the ship’s real or eventual target is Syria.

The Alaed turned back 50 miles off Scotland on June 18 and returned to its home port of Murmansk after its British insurer found out it had weapons bound for Syria on board and cancelled its policy rather than violate a EU arms embargo.

Its new departure under a Russian flag will provoke fresh tensions because the Kremlin sent a flotilla of naval ships headed by a destroyer, the Admiral Chabanenko, to the Mediterranean earlier this week. The flotilla is a short way ahead of the Alaed and is destined to call at Tartus, the Syrian port where Russia has a naval base.

On Wednesday, a senior Russian defence official said its navy could be dispatched to ensure the passage of merchant shipping to Syria.

“The fleet will be sent on task to guarantee the safety of our ships, to prevent anyone interfering with them in the event of a blockade,” Vyacheslav Dzirkaln said. “I remind you, there are no limits.”

Rosoboronexport, Russia’s state arms agency, confirmed in a statement on Friday that the overhauled helicopters were on board the Alaed. It did not mention the number, but originally there were three, which are thought to be the first deliveries of a larger batch.

Moscow has insisted that it is breaking no laws in delivering the aircraft, which already belonged to Syria but had been serviced in Russia under a contract signed in 2008. It says the helicopters are in parts and would take three months to assemble.

Russia also accuses the west of hypocrisy, pointing to reports that the CIA is coordinating arms supplies to Syrian rebels via Arab intermediaries.

Members of the Syrian National Council, a coalition of groups opposing Mr al-Assad, said this week during a visit to Moscow they were concerned the presence of Russian naval ships off Syria could encourage the president to use more violence against civilians.

Helicopter gunships reportedly fired on villagers in Ham province on Thursday, killing as many as 200 people.