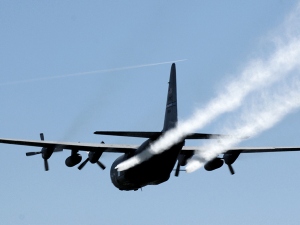 (Source: US Air Force) This is the type of plane that will be used in the Miami-Dade Mosquito spraying.

MIAMI – Skeeters a problem? Lots of people think so, so Miami-Dade officials are calling in the cavalry;well, actually, the Air Force to kill the biting pests and their breeding grounds. However, the attack may come as a surprise because of how low the spraying planes fly.

The county and the Air Force announced the plans Monday as complaints continue to rise. Recent rainy weather has caused the mosquito population to bloom, something that can cause problems to people headed to cookouts and 4th of fireworks celebrations.

Normally spraying is done in the early morning hours, but nighttime spraying allows the county another whack at the population.

This newest round of mosquito control involves a large C-130 cargo plane based in Ohio to spray Homestead ARB and communities of Doral, West Sweetwater, Kendall, Homestead, Florida City and areas east of U.S. 1, where heavy concentrations of mosquitos have been reported.

According to county officials, what may startle people the most is how low the planes fly. People in spraying areas could see planes just 150 feet off the ground and might be startled into thinking the plane is in trouble, but they said that is perfectly normal for spraying operations.

The planes will be spraying the pesticide Dibrom for the last two hours of the day July 10th, 11th and 12th, ending operations about a half hour after sunsets. The Air Force last conducted spraying like this in South Florida last July.

If you raise bees, the county said you should keep them covered during spraying operations. If you have allergies or sensitivity to pesticides, the spraying planners suggest you stay inside.

Residents are advised that aircraft will be flying as low as 150 feet.  Beekeepers are asked to keep their bees covered during the spraying operations in their particular area. Individuals with known allergic reactions should remain indoors.

People who have questions about the aerial spraying, or complaints about mosquitoes, can call the County’s 311 Answer Center.

Miami-Dade residents can help reduce the nuisance caused by mosquitoes by remembering the “five Ds:”

▪    Dusk and Dawn—avoid being outdoors when mosquitoes are most active.
▪    Dress—wear long, loose, light-colored clothing that covers the skin.
▪    DEET—use mosquito repellants that contain DEET
▪    Drainage—eliminate standing water around the home in places such as buckets, cans, old tires, and plant containers.