First thing this morning when discussing the upcoming festivities in Europe in the aftermath of Spain’s decision to hike sales tax from 18% to 21%, while making sure it is the common people who get hurt in the upcoming bank nationalization in which sub notes and hybrid debt is impaired, largely held by retail investors as the FT showed yesterday, we said that “Spain promised to crush its middle class even more by impairing retail held sub debt and hybrids, while forcing them to pay more taxes, a move which will lead to some spectacular Syntagma Square riotcam moments.” Three hours later and the riotcam is now live. 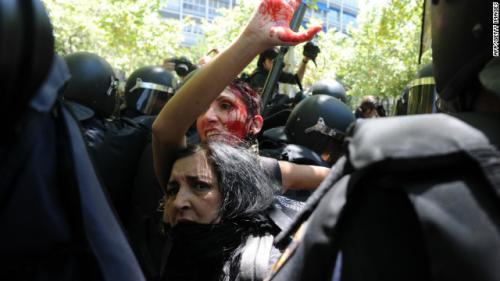 Hundreds of people moved quickly out of the area as the police moved in.

Protesters, including a group of miners who have marched on the capital, are demonstrating against Spain’s government and the austerity measures it is imposing as it seeks to curb the country’s debt crisis.

Madrid’s ambulance service said 43 people were injured in clashes at or near the Industry Ministry.

The injured include 26 miners and 12 police, as well as a number of supporters of the miners. Eight are receiving hospital treatment but the injuries are not serious, the ambulance service said.

The clashes came as Prime Minister Mariano Rajoy announced an increase in the sales tax from 18% to 21% and a series of spending cuts, Spanish news agency Efe reported.

Announcing the measures to lawmakers, Rajoy said they would cut the budget by 65 billion euros ($80 billion) over two-and-a-half years, according to Efe.

Actually the only thing the “measures” will lead to, as whoever is the Greek finmin these days can attest to, is precisely the same economic toxic spiral breakdown, where nobody pays taxes, and where daily strikes cripple the economy.

And of course the imminent arrival of Chorizo the riot dog.