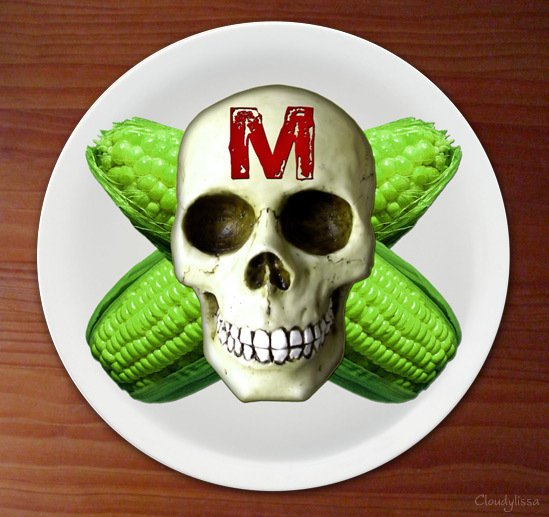 Monsanto recently published the company’s “2011 Corporate Social Responsibility and Sustainability Report” to further the illusion it is actually improving agriculture and sustainability, and by extension, helping humanity and our environment. Aside from raking in nearly $12 billion dollars last year blanketing the Earth in even more Frankencrops and poisonous pesticides, the genetic engineering giant spends over 100 pages listing awards and contributions as if Monsanto is the most philanthropic corporation to ever grace the planet.

Unfortunately, nothing could be further from the truth. As hard as the report is to stomach, the Monsanto Pledge, which lists the company’s supposed business ethic, takes the genetically modified cake. It starts with egregious lies and just gets worse from there.

Monsanto Pledge #1: INTEGRITY — Integrity is the foundation for all that we do.

Integrity is not the word most would choose to describe misleading dozens of Argentinean tobacco farmers about Monsanto product safety resulting in babies born with “devastating birth defects”. A lawsuit filed on behalf of the farmers earlier this year alleges Monsanto pushed for excessive use of the company’s best-selling Roundup herbicide glyphosate with full knowledge that farmers lacked requisite protective gear and their crops and livestock would be contaminated. The farmers claim they were not even given any disclosure on potential health dangers.

In a more recent lawsuit, five million Brazilian farmers are also suing the biotech giant for the return of over $7.5 billion Monsanto demanded in royalties on “renewal crops” harvested generations after its patented soybean seeds were purchased and planted. No law exists stating consumers who buy seeds must continue to pay a fee for new plants those seeds generate year after year. “Producers are in effect paying a private tax on production,” the farmers’ lawyer Jane Berwanger said in a statement.

Monsanto Pledge #2: DIALOGUE — We will listen carefully to diverse points of view and engage in thoughtful dialogue.

Forget thoughtful dialogue; Monsanto simply refuses to acknowledge responsibility for biological pollution disasters which have been scientifically linked to their products. As resistant superweeds and superbugs abound, the company pushes its pretense that people are more important than profits. Meanwhile, scientists and watch groups continue to point out that any added yield benefit is far outweighed by the ever increasing quantity of pesticide needed to grow Monsanto’s genetically engineered crops.

When widespread glyphosate use was blamed for mass bee deaths across the globe earlier this year, instead of engaging in “thoughtful dialogue,” Monsanto just went out and bought a leading bee research firm. Perhaps Beelogics will publish puff pieces absolving Monsanto of any colony collapse disorder wrongdoing the same way Monsanto-funded research published in the Journal of Toxicology and Environmental Health claimed “available literature shows no solid evidence linking glyphosate exposure to adverse developmental or reproductive effects.”

Somehow Monsanto still laughably claims it considers all potential health and environmental risks in its business practices. Is the $5 million a year Monsanto spends lobbying the US federal government part of this consideration? After paying so much for political preference, why would anyone believe everything Monsanto is fine merely because the US Department of Agriculture (USDA) says so? In fact, in a May 2012 Natural Society exclusive, a letter surfaced proving that not only was Monsanto’s genetically modified alfalfa being openly grown a full two years before it was officially deregulated in 2005, but the USDA knew about it and did nothing. The USDA is also championing environmental self-regulation now. In an effort to make the crop safety determination process more “timely, efficient, and cost-effective,” the department has announced a two-year pilot project wherein agribusinesses like Monsanto can conduct or outsource their own environmental impact assessments.

Let us all hope Monsanto works a little harder on those communication skills.

Monsanto Pledge #3: TRANSPARENCY — We will ensure that information is available, accessible, and understandable.

In 2011, one of Monsanto’s own shareholders put out a press release calling for more transparency. The word must be foreign to a company who refuses, at all costs, to allow its genetically modified organisms (GMOs) to be identified in food products sold across the United States.

Time and again, a plethora of polls have shown American consumers want to know if their food has been genetically altered. Twenty states across the nation have tried to pass labeling initiatives which would not only require GMO products to be clearly marked, but such reforms would also disallow these items from being advertised or sold as “natural” because they are not.

When constituents overwhelmingly backed the Vermont Right to Know Genetically Engineered Food Act (H. 722), Monsanto showed its willingness for transparency by threatening to sue the entire state should the bill pass. In response, Vermont lawmakers put voting on indefinite hold, likely due to the state’s past loss against Monsanto over dairy companies marketing bovine growth hormone-laden milk in 1994.

California has called the agri-giant’s bluff, however. State officials recently announced a similar GM-labeling initiative will appear on the Golden State’s November ballot after the California Right to Know organization submitted nearly one million supporting signatures. A nervous Monsanto has already contributed hundreds of thousands of dollars toward defeating the measure through the Council for Biotechnology Information’s newly formed Coalition Against the Costly Food Labeling Proposition. The coalition claims mandatory labeling is an expensive waste that lacks scientific justification. Monsanto can surely surmise the food revolution that would follow if California’s labeling mandate passes.

Aside from repeatedly forking over big bucks to defeat product transparency measures, Monsanto has also put its financial weight behind legislation targeting Ag whistleblowers. It does not get any less transparent than that.

Monsanto Pledge #4: SHARING — We will share knowledge and technology to advance scientific understanding, to improve agriculture and the environment, to improve crops, and to help farmers in developing countries.

Monsanto does know how to share. In fact, Monsanto is attempting to share its GM crops with the whole world, whether the whole world likes it or not. After France attempted to ban Monsanto corn amid national concerns for example, the European Union stepped in and blocked France from doing so. Wikileaks cables proved such moves are actually Monsanto company policy, and many U.S. diplomats are on the Monsanto payroll to serve such ends. The cables also exposed the U.S. Ambassador to France’s plan to “penalize” nations who refuse GM crops with “military-style trade wars”.

In addition, Monsanto readily shares its employees with the US government all the time: 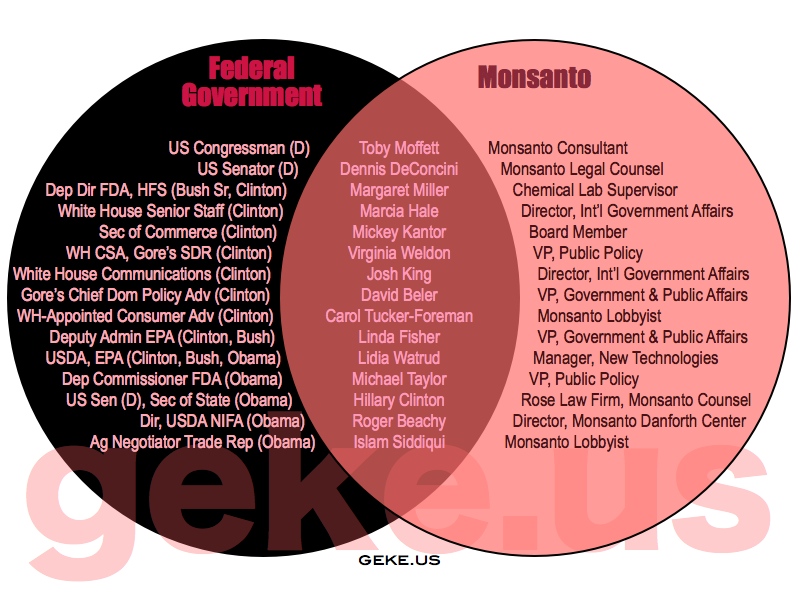 A few highlights include President Obama’s 2009 appointment of former Monsanto VP Michael Taylor as “food safety czar” — a senior adviser to the Food and Drug Administration (FDA). Considering Taylor formerly wrote the labeling guidelines for bovine growth hormones in milk (insisting no difference between milk with the hormone and milk without), it makes sense he would be charged with overseeing food safety. Speaking of, after Monsanto first got its bovine growth hormone approved for use in milk, then-Monsanto employee Margaret Miller prepared the report. When said report was later received by the government for evaluation, it was newly named Deputy Director of Human Safety and Consultative Services Margaret Miller who processed it.

With all this sharing going on, is it any surprise when Congress sides with Monsanto over the will of its people time and again, most recently allowing the company’s GM crops to be planted despite pending legal action surrounding the very same crops?

Monsanto Pledge #5: BENEFITS — We will use sound and innovative science and thoughtful and effective stewardship to deliver high-quality products that are beneficial to our customers and to the environment.

Monsanto Pledge #6: RESPECT — We will respect the religious, cultural, and ethical concerns of people throughout the world. The safety of our employees, the communities where we operate, our customers, consumers, and the environment will be our highest priorities.

Respect? Safety? This is just getting ridiculous now. Monsanto has a tireless history of utter disrespect for just about everything but the bottom line, including its products’ safety and their devastating effects on humanity and our planet. When the company does not want to face reality, it simply buys politicians and researchers and creates its own.

Monsanto has made its position on corporate social responsibility and sustainability blatantly clear: Monsanto’s highest priority is Monsanto.