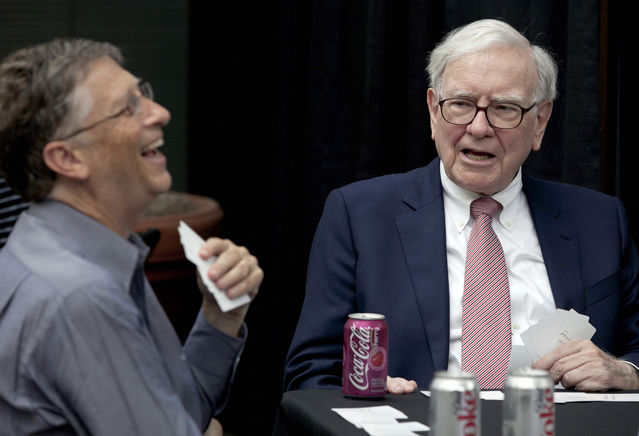 Warren Buffett, the billionaire who pledged to donate most of his wealth to charity, contributed stock valued at $1.52 billion in his annual gift to the foundation created by Microsoft Corp. (MSFT) co-founder Bill Gates.

Buffett, chairman and chief executive officer of Berkshire Hathaway Inc. (BRK/A), donated about 18.4 million of his company’s Class B shares to the Bill and Melinda Gates Foundation, according to a filing issued yesterday. The shares closed at $82.54 in New York.

Buffett, a trustee of the foundation, is the third-richest man in the world, with a net worth of about $46 billion, according to the Bloomberg Billionaires Index, a daily ranking of the wealthiest people. He has campaigned to promote charitable giving.

“I urge people to unbutton their wallet, pull out a check, reach into their purse, whatever it takes,” Buffett, 81, said last year in a YouTube video. “You will find that when you give a dollar and something of yourself, a lot more than a dollar comes out the other end.”

Buffett announced plans in 2006 to donate 10 million Class B shares to the Gates Foundation and made an initial gift of 500,000 shares. He said he’d release 5 percent of the remaining balance of the stock each year. That means each donation includes fewer shares than the year before.

The Berkshire executive said in a 2006 letter that he expected the value of the shares to rise “in an irregular manner, by an amount that more than compensates for the decline in the number of shares that will be distributed.” The B shares were split 50-1 in 2010.

The Gates Foundation supports organizations throughout the world aimed at improving education initiatives, enhancing health care and reducing poverty. Gates, 56, is the world’s second- richest man behind Carlos Slim, the Bloomberg index shows. A Berkshire director, Gates has joined Buffett in promoting the Giving Pledge, a push to encourage wealthy people to donate most of their fortunes to charity.

Following is a summary of Buffett’s stock donations to the Gates Foundation.