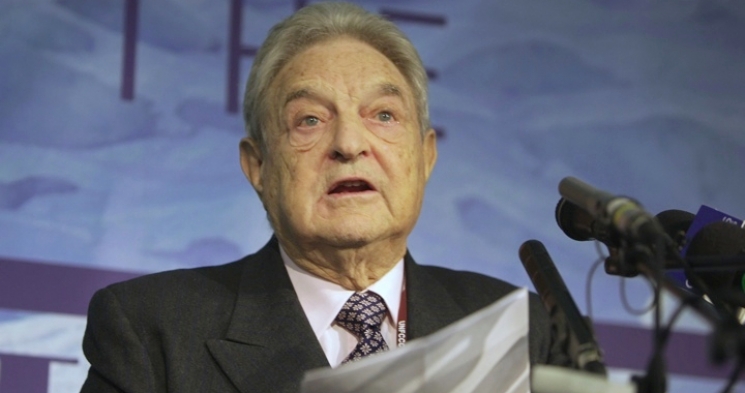 George Soros is financing the fight to give the United Nations control of your guns.

Through his Media Matters organization, Soros is dumping pro-UN gun control propaganda into the mainstream media to coincide with the United Nations Conference on the Arms Trade Treaty being held in New York July 2–27.

In a blog post published on July 3, Timothy Johnson of Media Matters describes the notion that the United Nations would ever try to take away the right of Americans to keep and bear arms “laughable.”

Johnson goes on to promote the passage of the UN’s Arms Trade Treaty (ATT) as a means of “curtailing the illicit arms trade” and thus cracking down on those who use these weapons to deny others their “human rights.”

The blog post assures citizens concerned about the potential eradication of the rights guaranteed in the Second Amendment to the Constitution that they have nothing to fear from the UN’s gun control treaty.

Top officials from the United Nations, the United States, and other high profile supporters have repeatedly and clearly said that the treaty does not aim to restrict anyone’s “freedom to own” a gun.  Indeed, the UN General Assembly’s resolution on the treaty makes clear that countries will “exclusively” maintain the right within their borders to “regulate internal transfers of arms and national ownership, including through national constitutional protections on private ownerships.”

First, there need be no quotation marks around the phrase freedom to own a gun. Americans should enjoy the unqualified right to bear arms and it is not some antiquated idea or some unicorn-like mythical creature that requires special punctuational treatment. Americans are well aware that an unarmed citizenry is easier to subdue and will rightly resist all efforts to abridge that right.

Second, the citizens of the United States do not need the permission of the United Nations to maintain the “exclusive” right to own a gun. This right, as with all others protected by the Constitution and the Bill of Rights, comes from God, not man, and may be neither given nor taken away by any government.

Undaunted, however, Soros will continue to use his mouthpieces to promote the globalist agenda, including the incremental dismantling of the U.S. Constitution and the sovereignty it protects.

The current draft of the ATT mandates that the governments of member states petition the United Nations for approval of any contract to sell weapons to any nation where there exists a “substantial risk of a serious violation” of human rights.

While the end of reducing the abuse of human rights is laudable, the means to achieve that cannot lawfully include the requirement that the Congress of the United States ask for permission from the UN overlords before it passes a law, including one authorizing the sale of arms to another country. That is a direct assault on American legislative sovereignty, and an indirect attack on the sovereignty of the American people who elect the members of Congress who vote on such measures.

In the text of the ATT, the United Nations specifically calls for the passage of a legally binding instrument that will impose international standards for the ownership, trade, and transfer of weapons.

In another section the ATT includes “controls on a comprehensive list of weaponry, including small arms and light weapons.” Predictably, all these controls are couched comfortably in talk of “human rights” and ending senseless killings by rogue regimes.

In order to avoid being labeled a “human rights abuser,” the United States (along with all member states) is ordered by the UN to comply with the ATT. To compel this compliance, the ATT empowers the UN to force Congress to:

• Confiscate and destroy unauthorized firearms of Americans while allowing the U.S. government to keep theirs

• Ban the trade, sale, and private ownership of semi-automatic guns

On this point, in 2011, the UN’s General Assembly declared “that disarmament, arms control and non-proliferation are essential.” In other words, if world peace, the protection of human rights, and the disarming of violent regimes could be achieved through the confiscation of personal firearms, then so be it.

Make no mistake, however, Soros and his fellow globalist gun controllers don’t have in mind (at least at first) to march blue-helmeted UN soldiers into the homes of Americans with orders to seize their guns and ammunition. Rather, through the passage of binding international treaties and UN resolutions, they will force the national governments of the world to do the dirty work for them.

Sadly, officials of our own federal government, including President Obama, are pushing Congress to sign off on this treaty.

Secretary of State Hillary Clinton has announced that the Obama administration is working with the UN to lean on Congress to consent to the ATT.

Clinton has pushed the treaty as an “opportunity to promote the same high standards for the entire international community that the United States and other responsible arms exporters already have in place to ensure that weaponry is transferred for legitimate purposes.”

There is little doubt that the scope of those “legitimate purposes” will be determined by Soros, Clinton, Obama, and the rest of the globalist gang who have much to fear from an armed and educated citizenry.

For now, the resistance to ratification of such a treaty is strong in the United States. Last July Senator Jerry Moran (R-Kan.) and 44 other senators sent a letter to President Obama and Secretary Clinton encouraging them to stop pushing for passage of UN gun control treaties. In the letter, Moran wrote:

Our country’s sovereignty and the Second Amendment rights of American citizens must not be infringed upon by the United Nations. Today, the Senate sends a powerful message to the Obama Administration: an Arms Trade Treaty that does not protect ownership of civilian firearms will fail in the Senate. Our firearm freedoms are not negotiable.

George Soros, through his Media Matters outlet, promises that “U.S. gun owners have nothing to fear” from the ATT or from similar UN agreements to restrict the manufacture, transfer, and possession of firearms. The globalists’ only goal, they maintain, is “the maintenance of international peace and security.”

For those whose fears are assuaged by such gentle words, we offer this competing comment from Benjamin Franklin written in a letter penned in 1755: “Those who would give up essential Liberty, to purchase a little temporary Safety, deserve neither Liberty nor Safety.”