The Fed does everything it can to keep LIBOR low.

This chart says it all. 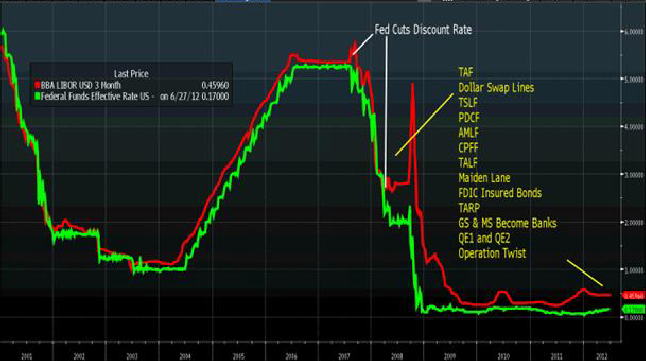 The Fed cannot affect LIBOR directly, but in general LIBOR trades in line with Fed Funds.  You can see that historically as Fed Funds was changed, LIBOR responded appropriately.  There was typically some small premium to reflect the “credit risk” of banks versus the Fed, but it was relatively small, and fairly stable.  3 Month LIBOR would deviate a bit as rate cuts and hikes were anticipated in the market, but in general, it was a fairly stable game.

That all started to break down in 2007.  We saw the first real signs of LIBOR deviating from its normal spread to Fed Funds in the summer of 2007. The Fed responded by cutting the “penalty” rate for using the discount window, and in fact encouraged banks to use the discount window (I still can’t shake the mental image of someone sitting in a dark basement with a green eye-shade doling out money to banks that request it).  Then the crisis got worse.  Bear needed to be rescued.  Facilities such as the Term Auction Facility that had been put in earlier were increased in size.  The Fed backstopped some portfolios that JPM acquired as part of the Bear Stearns deal.

They increased dollar swap lines so foreign banks could borrow.  The Fed stepped into the commercial paper market so banks wouldn’t have to use money to meet drawdowns on revolvers.  TALF was another creation to take pressure of bank lending.

The FDIC allowed banks to issue bonds with FDIC backing (so not quite Fed program, but who is going to quibble).

Fears that MS and GS and GE would topple the banks were alleviated by making them banks.

The list goes on.  The Fed has done a lot and trying to control LIBOR as a key borrowing rate is one of the things they have worked on, both directly and indirectly.