“I believe that if the people of this nation fully understood what Congress has done to them over the last 49 years, they would move on Washington; they would not wait for an election….It adds up to a preconceived plan to destroy the economic and social independence of the United States!”
– George W. Malone 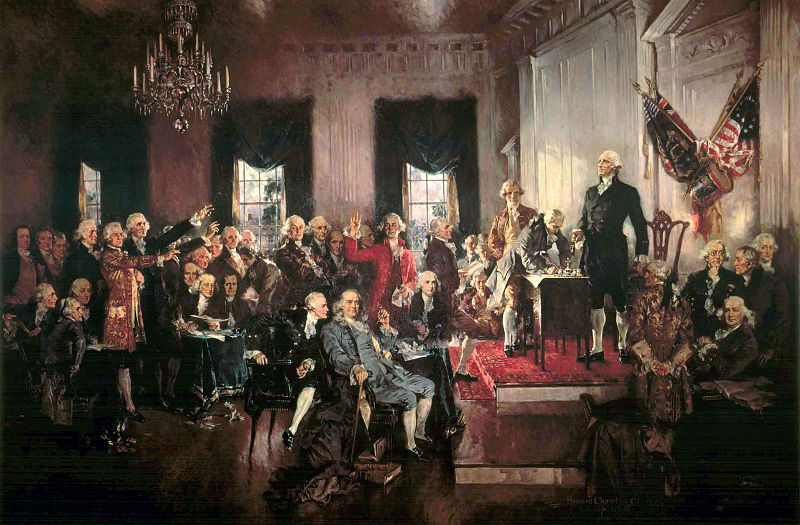 “Can anyone honestly argue that our nation still honors the values, or practices the principles, for which our Founders fought?”(Photo credit: Wikipedia)

Why do we still celebrate Independence Day? Is it a lingering habit, a mindless bit of nostalgia, a time to indulge in fireworks and barbecues, devoid of any deeper meaning? Can anyone honestly argue that our nation still honors the values, or practices the principles, for which our Founders fought?

Today, most Americans have been trained to be embarrassed by the “extremist” individualist ethos that made the protection of liberty the primary purpose of government. They have been taught to apologize for the shortcomings of the “rich white men” who led the revolution. A majority of Americans now subscribe to an expansive view of government as both great provider and beneficent leveler. Its primary purpose is to redress unequal or unhappy outcomes, regardless of their source, through wealth redistribution on a scale so vast that it mocks the concept “private property.”

As for the causes of revolution, we’ve lost sight of them, too. King George III was a champion of laissez-faire compared to the modern cradle-to-grave entitlement state. The swollen capital city named after the man who won our freedom now claims the prize for erecting “a Multitude of new offices” bent on sending out “Swarms of officers to harass our people and eat out their substance.” If there is a field of endeavor that the federal government does not yet regulate, subsidize, or penalize, just wait. A new law is only a “crisis” away.

Have these new offices been imposed on us by some malevolent force that has undermined the workings of democracy? No. We the people ceaselessly demand new offices at an accelerating rate. The majority of Americans vote as if they believe that massive new government programs— created by incomprehensibly complex laws and administered by increasingly unaccountable bureaucrats—can solve an expanding array of “problems” which our Founders would have surely concluded were the proper province of civil society and not the sovereign state.

The King was criticized for unjustly imprisoning seamen. Today, our federal and state governments imprison more of our fellow citizens than any totalitarian regime in history—the vast majority for violating a futile prohibition on the possession, sale, or consumption of substances our Founders would not have thought twice about. Vast portions of our youth are thus rendered permanently unemployable, branded as felons and outcasts with nowhere to turn but a life of crime. And yet we persist in this folly, unable to admit that drug prohibition has been as huge a failure as alcohol prohibition.

And taxes? The Founders knew a tax when they saw one—and there were very few they could abide, with or without representation. Thanks to a Supreme Court that long ago gave up defending the Constitution, we now have a chameleon levy that is not a tax when politically inconvenient yet magically becomes a tax when seeking constitutional muster. As if we didn’t have a wide enough variety of taxes, this new tax is designed to penalize anyone who refuses to participate in a great communal project designed to make every citizen even more deeply dependent on the government.

Little by little, the home of the brave and the land of the free has become a nation of rent-seeking dependents clamoring for their share of state largess. Even before the latest entitlement blowout called Obamacare, we crossed the line where more than half of Americans receive some kind of assistance from the government every month, paid for by the fewer than half that still pay income taxes. As we move into the future and the number of dependents grows while the taxpayer pool shrinks, we call the result social justice rather than its old name: theft.

Our forefathers shed blood rather than render unto King George. Yet today we madly mortgage our nation’s future to foreign powers, piling debt upon debt without limit or thought as to how it will be repaid. These debts ensnare our children and grandchildren even as we stop having them, confident in the knowledge that the government will take care of us in our old age, so why bother with the trouble and expense?

If we were still a nation capable of shame with enough intellectual integrity to call things as they are, if we hadn’t debauched our language as badly as our currency, if we had the courage to look in the mirror and see how woefully we have squandered our Founders’ legacy, this Fourth of July would be a day not of celebration but of atonement.

Give some thought to what we have lost as we mark another In Dependence Day. May providence have mercy on our nation, lest we end up getting what we deserve.