There is a perverse macro-level outcome from over-zealous central-planning. We have talked in the past about the greater risk of huge tail events in a controlled/normalized/planned/smoothed world, but as SocGen’s Dylan Grice in an analogy to driving: “traffic lights and road signs are well intentioned, but by subtly encouraging us to lower our guard they subtly alter the fundamental algorithm dictating micro-level driving behavior.” In other words, we drop our guard. With the plethora of financial market traffic light and road signs (Basel III, Solvency II, Bernanke Put) the fear is that this illusion of capital or safety has made markets more lethal (think AAA-rated bonds for a simple example). “We should be able to understand that the world isn’t risk free, can never be made risk free and that regulations which trick people into thinking it is risk free serve only to make it more dangerous.” But instead, following the rule-of-Iksil (baffling with bullshit), regulators have gone the traditional route – but this time to an exponential place of craziness with Dodd-Frank – layering complexity upon complexity to give an out to those who abuse it most. Perhaps, as Grice notes, instead of focusing on ‘fixing’ the “crisis of capitalism”, it would be more pragmatic to focus on the “crisis of dumb counterproductive intervention”? 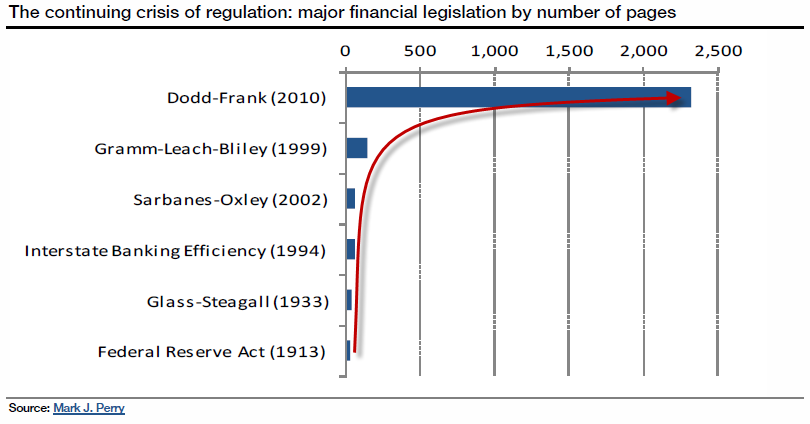