Like the West Side Highway in Manhattan, the peer review process in climate science had drowned by the year 2008.

A new article in Nature claims that sea level is rising much faster in the Northeastern US than on the rest of the planet.

WASHINGTON — From Cape Hatteras, N.C., to just north of Boston, sea levels are rising much faster than around the globe, putting one of the world’s most costly coasts in danger of flooding, government researchers report.

U.S. Geological Survey scientists call the 600-mile swath a “hot spot” for climbing sea levels caused by global warming. Along the region, the Atlantic Ocean has risen at an annual rate three to four times faster than the global average since 1990, according to the study published Sunday in the journal Nature Climate Change. 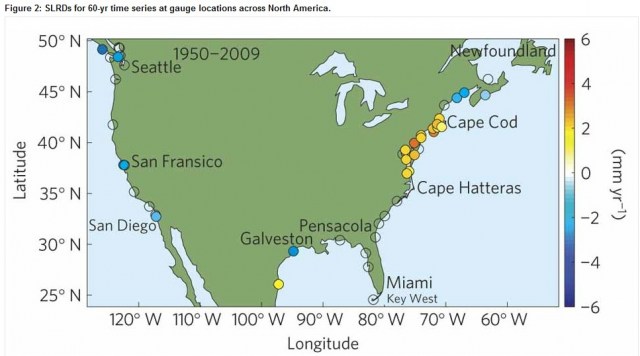 Had anyone with half a brain peer-reviewed this paper, they would have looked at the satellite data and realized that there has been little or no sea level rise in that region over the last decade. Much of the rise in sea level which the authors think they are seeing, is actually due to subsidence of the land.