In what may come as a shocking surprise to exactly nobody, the next great discovery as more and more layers of the global ponzi onion are exposed, is that China was, in fact, lying about everything. Yes, we know, stunning.

As the Chinese economy continues to sputter, prominent corporate executives in China and Western economists say there is evidence that local and provincial officials are falsifying economic statistics to disguise the true depth of the troubles.

Record-setting mountains of excess coal have accumulated at the country’s biggest storage areas because power plants are burning less coal in the face of tumbling electricity demand. But local and provincial government officials have forced plant managers not to report to Beijing the full extent of the slowdown, power sector executives said.

Even that lonely indicator that some, even us, had considered somewhat realistic: electric output, is a mirage.

Electricity production and consumption have been considered a telltale sign of a wide variety of economic activity. They are widely viewed by foreign investors and even some Chinese officials as the gold standard for measuring what is really happening in the country’s economy, because the gathering and reporting of data in China is not considered as reliable as it is in many countries….

But an economist with ties to the agency said that officials had begun making inquiries after detecting signs that electricity numbers may have been overstated….

In other words, the chart we showed a month ago showing already collapsing Chinese power production is far, far worse in reality. 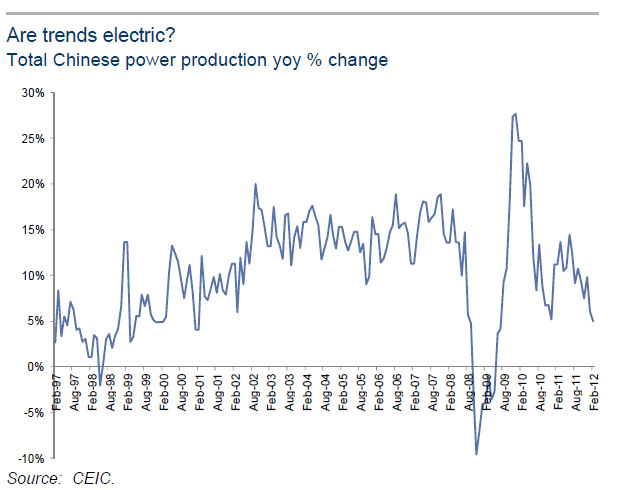 So why is everything piece of data out of China a lie (and by implication, why are all talking heads and pundits who preach the China “bull case” full of it)? One simple reason: politics.

Questions about the quality and accuracy of Chinese economic data are longstanding, but the concerns now being raised are unusual. This year is the first time since 1989 that a sharp economic slowdown has coincided with the once-a-decade changeover in the country’s top leadership.

Officials at all levels of government are under pressure to report good economic results to Beijing as they wait for promotions, demotions and transfers to cascade down from Beijing. So narrower and seemingly more obscure measures of economic activity are being falsified, according to the executives and economists.

“The government officials don’t want to see the negative,” so they tell power managers to report usage declines as zero change, said a chief executive in the power sector.

When all is said and done, the reality is that China, which according to idiotic press rumors that resurface every 2 weeks is supposed to bailout, is in a condition that is worse than even where it was after the Lehman collapse:

The question is whether the actual slowdown is even worse. Skewed government data would help explain why prices for commodities like oil, coal and copper fell heavily this spring even though official Chinese statistics show a more modest deceleration in economic activity.

Manipulation of official statistics would also provide a clue why some wholesalers of consumer goods and construction materials say sales are now as dismal as in early 2009.

Studies by Goldman Sachs and other institutions over the years have strongly suggested that Chinese statisticians smooth out the quarterly growth figures, underreporting growth during boom years and overstating growth during economic downturns.

And Chinese officials have raised questions in the past about the reliability of Chinese economic statistics. An American diplomatic cable released by WikiLeaks shows that Li Keqiang, widely expected to become premier of China this autumn, said in 2007 that he regarded China’s broad measures of economic growth as “ ‘man-made’ and therefore unreliable.”

So… let’s see here: huge disparity between what is represented and what the reality is… a crucial political election… and a regime that many have accused of misreporting critical data for years (even if others captured media outlets accuse the former of being conspiracy theorists)…

Why… could this possibly mean that every piece of data out of the US is just as made up and just as meaningless? Now that would be truly unpossible.