The “Syrianna” story from this afternoon, which many were quick to label as merely a lot of diplomatic hot air and rhetoric, just turned uglier, after Syria not only did not officially apologize as Turkey PM Erdogan implied had happened previously for the shot down Turkish F-4 fighter jet, but instead turned the tables on Turkey, and gave itself an out for what is now a definitive military action. From Reuters:

The Syrian military said it shot down a Turkish military aircraft “over Syrian territorial waters” on Friday.

“Our air defences confronted a target that penetrated our air space over our territorial waters pre-afternoon on Friday and shot it down. It turned out to be a Turkish military plane,” a statement by the military circulated on state media said.

The only question remains whether Syria’s act was offensive or defensive. Naturally, its version is one of self-defense. Turkey obviously will claim it was in its right to be wherever the plane may be, and will say this was an act of provocation. Then NATO, read Hillary Clinton, will promptly step in, and make this a case in which Turkey was in its right and that Syria committed an act of aggression. From there, things will just escalate, and can potentially deteriorate to a far more troubling scale, because as we reminded earlier, Syria has recently become a major symbol for NATO vs the Russia-China axis:

Here is the rub: Turkey is a NATO member, and by definition the alliance will have to come to Turkey’s aid if requested. Syria, however is not just any country as has been made quite clear over the past several months of UN impotence: it is a critical staging ground for both Russia (which has a very critical regional naval base in the city of Tartus) and China, and according to the Jerusalem Post, the three countries are in preparation to conduct the “largest ever” war game. As such Syria, already gripped by fierce local fighting, where just like in Egypt and Libya the presence of US-based flipflop on the ground can be smelt from across the Atlantic, is merely a symbol. The real implication is how far can little escalations push until finally the showdown begins, with NATO on one side and Russia and China on the other?

Ultimately, the key catalyst here may be something as simple as whether the pilot of the Turkish plane are alive or dead. BBC explains:

Given the breakdown in relations between the two countries over the Syrian conflict, this incident has the potential to provoke a serious crisis. When gunfire from Syrian forces crossed the Turkish border earlier this year, Ankara threatened a military response.

Much will depend on whether or not the Turkish pilots have survived. If not, public anger might push the government into some kind of punitive action against Syria.

Syria’s response will also influence Turkey’s reaction. A clear apology, and a statement that the shooting was unintentional, might be enough to assuage Turkish anger.

But then again, we do not know yet whether the aircraft were clearly in Turkish airspace or not. Initial Turkish reports that they came down eight miles from Syrian territorial waters suggests that they were, but Syria may claim otherwise.

At this point it is clear no apology will be forthcoming as Syria’s official story is that Turkey had effectively committed an act of aggression against it. So it is up to the viability of the pilots. If dead, anyone who may have been shorting Brent into the weekend may have a nasty surprise come start of trading Monday.

Where the crash supposedly happened: 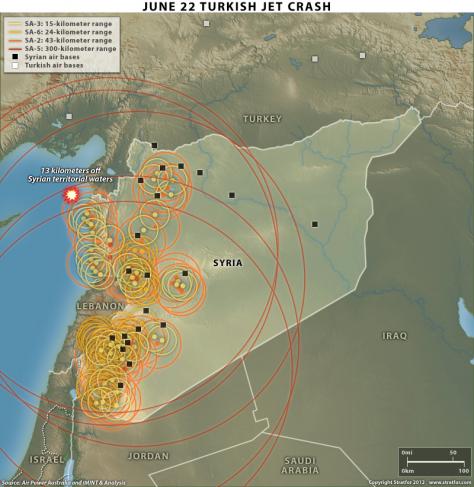