International Advisor Of Goldman Sachs, Chairman Of The European Branch Of The Trilateral Commission And Bilderberg Member Mario Monti:

We have a week to save the eurozone

“The Italian leader is to hold talks with Bilderberg Chancellor Angela Merkel of Germany, the Bilderberg French president, François Hollande, and Spain’s prime minister, Mariano Rajoy, in the hope that the single currency’s big four countries can pave the way for a breakthrough at next week’s meeting. 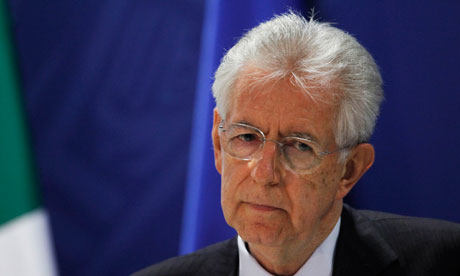 Italian prime minister Mario Monti has spoken of the potentially disastrous consequences of the collapse of the eurozone. Photograph: Edgard Garrido/Reuters

Italy’s prime minister, Mario Monti, has warned of the apocalyptic consequences of failure at next week’s summit of EU leaders, outlining a potential death spiral that could threaten the political and economic future of Europe.

The Italian leader is to hold talks with Chancellor Angela Merkel of Germany, the French president, François Hollande, and Spain’s prime minister, Mariano Rajoy, in the hope that the single currency’s big four countries can pave the way for a breakthrough at next week’s meeting.

Speaking to the Guardian and a group of leading European newspapers, Monti said that, without a successful outcome at the summit, “there would be progressively greater speculative attacks on individual countries, with harassment of the weaker countries”. The attacks would be focused not only on those who had failed to respect EU guidelines, but also on those like Italy, which he said had abided by the rules “but which carry with them from the past a high debt”.

Monti warned: “A large part of Europe would find itself having to continue to put up with very high interest rates that would then impact on the states and also indirectly on firms. This is the direct opposite of what is needed for economic growth.”

Outlining the result of a failure at the talks, Monti said that, faced with creeping economic paralysis, “the frustration of the public towards Europe would grow”, creating a vicious circle. “To emerge in good shape from this crisis of the eurozone and the European economy, ever more integration is needed,” said Monti. Yet, if the summit failed to resolve the problems quickly, “public opinion, but also that of the governments and parliament… will turn against that greater integration”.

Monti said he could see the beginnings of the process “even in the Italian parliament, which has traditionally been pro-European and no longer is”.

He made his remarks hours after his predecessor, Silvio Berlusconi, acknowledged that his party had bled support because of its backing for the Monti government’s unpopular budgetary measures and spoke openly for the first time of the electoral advantage it could derive from torpedoing Monti’s non-party cabinet of technocrats.

Monti signalled that the key eurozone leaders were working on a plan designed to halt the spread of debt contagion while satisfying Germany’s refusal to sanction financial irresponsibility. The plan, he said, was one of the “absolutely necessary” outcomes of next week’s summit.

The first outcome, he said, would be a clear sign of the eurozone’s willingness to integrate further “in such a way that Europeans know where they’re going… [and] the markets are convinced that, having given birth to the euro, the will [of the member states] to make it indissoluble and irrevocable is there and will be strengthened by other steps towards integration”.

He warned: “There may not be – indeed, there will not be – a fully-fledged, detailed blueprint, but there will some strong elements and a short road – I hope short, a few months – to get from there to the overall project.”

Other minimum requirements were “a fuller banking union, with advances in terms of integrated, and if possible unified, supervision”; “a European deposit guarantee” system; and the plan that will be on the table on Friday for “new market-friendly policy mechanisms” to help out countries under attack – provided they had complied with EU demands for fiscal discipline.

On Thursday figures indicating that the eurozone is slipping into recession heightened fears that Italy will follow Spain in asking Brussels for rescue funds. Only a strong performance from Germany stopped the currency union from contracting in the first quarter. But separate data showed the German private sector suffered a severe downturn in May, made worse by a slump in manufacturing.

The German services sector continued to expand, but this solitary piece of good news is unlikely to keep the eurozone from recession in the second quarter, especially after both manufacturing and services contracted in France.

Elsewhere, the US suffered a slowdown in growth across the manufacturing sector and China registered its eighth consecutive contraction in production.

Without recourse to strongly growing export markets, Italy can expect to see its growth hit for another year, analysts said.

Monti said the proposed new mechanism would kick in “when there is a recognition by the European authorities of respect for the rules on public finance and structural reforms”. Making intervention conditional on good behaviour could offer a way of providing relief for countries like Italy and Spain, while meeting German demands for fiscal discipline.

Monti avoided giving details but said he was “very favourable” to the purchase of the bonds of countries under attack. The present system, of assistance to the banking sector by way of the state, led to an increase in public debt that raised the yields – and cut the value – of government bonds, which in turn weakened the finances of the banks, creating “a disagreeable spiral… That is why measures to de-couple this are being studied”, he said.