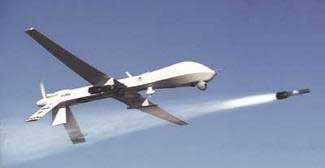 A recent Department of Defense report to Congress as well as a number of media investigations have exposed government plans to deploy tens of thousands of drones over the US mainland in the coming years.

An investigative report published over the weekend by the Christian Science Monitor cited the government’s own estimates that “as many as 30,000 drones could be part of intelligence gathering and law enforcement here in the United States within the next ten years.”

Unmanned aerial systems (UAS) and unmanned aerial vehicles (UAVs), commonly known as “drones,” are extremely sophisticated remotely-operated aircraft, developed and manufactured by the military-industrial complex in recent years at a cost of billions of dollars.

Drones vary in size from the four-pound RQ-11B Raven surveillance drone, which can be launched by hand, to the giant MQ-9 Reaper combat drone, manufactured by Northrup Grumman. The Reaper has a maximum take-off weight of 7,000 pounds, including up to 3,000 pounds of bombs, missiles and other armaments.

The infamous MQ-1 Predator drone, armed with 100-pound Hellfire missiles, is the Obama administration’s favored weapon in its illegal assassination program. A Predator drone was used in the unprecedented assassination of a US citizen, Anwar al-Awlaki, in Yemen last September.

With a push of a button, thousands of pounds of high explosives can be dropped on anyone, anywhere in the world, with startling precision. Safe behind video screens at military bases within the US, military drone operators refer to their victims as “bug splats.” Thousands of innocent civilians have already been murdered in this way in Iraq, Pakistan, Yemen, Somalia, Afghanistan and elsewhere.

An April Department of Defense report, titled “Future Unmanned Aircraft Systems Training, Operations, and Sustainability,” reveals that a massive drone infrastructure is already being erected within the US, with billions of dollars being allocated, bases being erected, thousands of pilots and crews being trained, and inventories being stockpiled.

The report identifies 110 military bases that will serve as drone launch sites. The deadly Predator and Reaper drones will operate out of Creech Air Force Base (AFB) in Nevada, Holloman AFB and Cannon AFB in New Mexico, Fort Drum in New York, Grand Forks in North Dakota, Ellsworth AFB in South Dakota, Whiteman AFB in Missouri, and the Southern California Logistics Airport, among others.

The accompanying map, from an Air Force power-point presentation released this month, shows current and projected locations for drone bases within the US.

The Department of Defense report argues for lifting the current framework of restrictions on drone flights over the US on the grounds that it “does not provide the level of airspace access necessary to accomplish the wide range of DoD UAS missions at current and projected operational tempos (OPTEMPOs).”

The language of the report is revealing and ominous. “This constraint will only be exacerbated as combat operations shift from abroad and systems return to US locations,” the report states. It expressly refers to plans to “conduct continental United States (CONUS)-based missions.”

In January, Congress passed HR 658, which requires the Federal Aviation Administration to take steps to facilitate the integration of drones “into the national airspace system.” President Obama signed the bill on February 14 with no public discussion or comment. (See “Drones come to the US”)

Since Obama signed the bill, hundreds of drones have already begun flying over the US to spy on and monitor the population. A recent ABC News investigative report entitled “UAVs: Will Our Civil Liberties Be Droned Out?” outlined the possibility of drones buzzing overhead becoming “a fact of daily life.”

“Among the most eager to fly domestic drones are America’s police departments,” the report stated. “In Texas, a Montgomery county sheriff’s office recently said it would deploy a drone bought with money from a Department of Homeland Security grant and was contemplating arming the drone with non-lethal weapons like tear gas, rubber bullets or Taser-style rounds.”

The ABC News report identified “political protests” as one of the activities that can be monitored by drones.

In December, the American Civil Liberties Union published a detailed report on the dangers of a massive build-up of surveillance drones within the US, warning that “our privacy laws are not strong enough to ensure that the new technology will be used responsibly and consistently with democratic values.”

Jay Stanley, senior policy analyst at the ACLU, described last month a “nightmare scenario” of widespread drone spying leading “to an oppressive atmosphere where people learn to think twice about everything they do, knowing that it will be recorded, charted, scrutinized by increasingly intelligent computers, and possibly used to target them.”

According to a Los Angeles Times article in December of last year, the FBI and the Drug Enforcement Agency (DEA) are already using Predator drones for operations within the US. Last week, a huge Global Hawk drone being operated by the US Navy for an unknown purpose crashed in Maryland.

The build-up of drone bases within the US is one component of preparations by the US government for a confrontation with its own population. Like everything else associated with the so-called “war on terror”—including torture, detention without trial, warrantless spying, assassinations, military tribunals, and expanded executive and intelligence powers—the use of drones for spying and assassination in the Middle East is a prelude to the development of systems that will ultimately be used against the American people in the event of social upheavals.

On “Terror Tuesdays” at the White House, President Obama helps draw up a list of opponents of US policy overseas who are to be illegally assassinated by drone-fired missiles. These “kill lists” have already included US citizens. With tens of thousands of drones flying overhead, and with the US mainland designated as a “battleground” in the never-ending and geographically unlimited “war on terror,” the US ruling class hopes one day soon to be able to eliminate its domestic opponents with similar ease.