The existence of President Barack Obama’s drone campaign against al-Qaeda in Yemen and Somalia has been acknowledged by the White House for the first time. 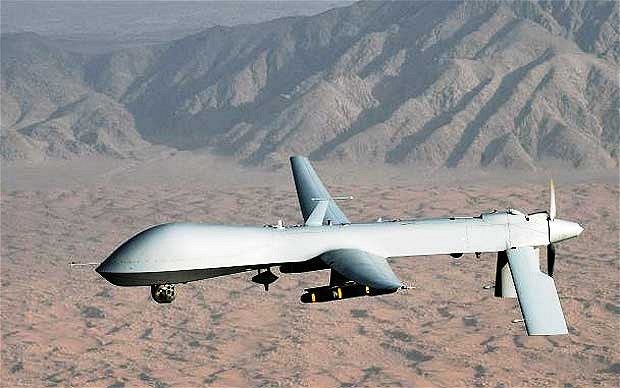 US Air Force image of a Predator drone Photo: REUTERS

Officials confirmed in the White House’s semi-annual report to Congress on the state of US combat operations abroad that “direct action” was being taken against terrorists in the two countries.

The report, which described the Yemen-based al-Qaeda in the Arabian Peninsula (AQAP) as “the most active and dangerous affiliate of al-Qaeda today”, comes amid fury among Republicans over alleged national security leaks to the media by the Obama White House.

Eric Holder, the Attorney General, has appointed federal prosecutors to investigate whether classified information may have been deliberately leaked to reporters and authors in order to boost Mr Obama’s foreign policy credentials.

A New York Times article last month disclosed the existence of a “kill list” of terror suspects over which the President has the final say. Mr Obama has denied allegations that details of the list were intentionally leaked, calling the suggestion “offensive”.

The report said that in Somalia the US armed forces have been working to combat al-Shabaab, the region’s most prominent al-Qaeda affiliate.

“In a limited number of cases, the US military has taken direct action in Somalia against members of al-Qaeda, including those who are also members of al-Shabaab, who are engaged in efforts to carry out terrorist attacks against the United States and our interests,” it said.

The report covers the activities of the US military but not those of the CIA, which has its own fleet of drones and whose actions remain secret.