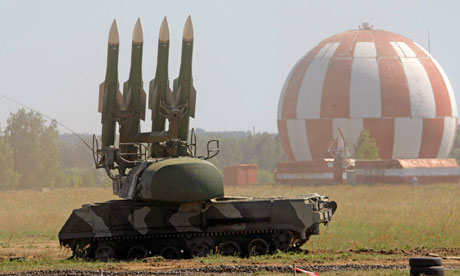 A Russian arms dealer has said his company is shipping missile defence systems to Syria that could be used to combat international intervention in the country.

Anatoly Isaykin, the general director of Rosoboronexport, said the advanced defensive missile systems could be used to shoot down planes or sink ships.

Speaking in an interview with the New York Times, Isayakin said his disclosure was not a threat but a warning.

“I would like to say these mechanisms are really a good means of defence, a reliable defence against attacks from the air or sea. This is not a threat, but whoever is planning an attack should think about this.”

The weapons that Isaykin claims he is exporting are not considered cutting edge, but will add to tensions between those who want to see more diplomatic pressure put on Syria and those who argue against international involvement – namely Russia and China.

Almost a week ago, comments made by the Russian foreign minister, Sergei Lavrov, suggested a weakening in Moscow’s backing of Syria’s president, Bashar al-Assad. He said that Russia would no longer stand in the way of a departure of the president.

“If Syrians agree between each other, we will only be happy to support such a solution,” he said. However, he still insisted that it was “unacceptable” for any conditions of departure to come from outside the country.

Russia has continued to supply arms to Syria, including recent reports that it is preparing to send an amphibious landing vessel and security staff for military installations, although it claims that these have been for the purposes of defence and not the regime’s civil campaign.

Isaykin said weaponry being shipped to Syria included the Pantsyr-S1, a radar-guided missile and artillery system capable of hitting planes at high altitudes, Buk-M2 anti-aircraft missiles and land-based Bastion anti-ship missiles, which can fire at targets 180 miles from the coast.

But Ruslan Aliyev, from the Centre for the Analysis of Strategies and Technologies in Moscow, said Isaykin’s disclosure was made primarily for political effect, as Russia was not supplying its most cutting-edge weaponry.

“As far as I understand, Syria is not able to defend itself from Nato, just like it failed to defend its nuclear facility from Israel’s September 2007 air strike,” Aliyev told the New York Times. “Russian armaments are unlikely to be significantly helpful.”

The US recently backtracked on claims that Russia had sent attack helicopters to Damascus and was forced to acknowledge that the helicopters were refurbished ones already owned by the regime.

The accusation by Hillary Clinton prompted Russia to accuse the US of hypocrisy over military equipment, including jet engines and patrol boats that were sold to Bahrain despite civil unrest in the Arab state.