– US Draws Up Plans For Nuclear-Powered Drones:

American scientists have drawn up plans for a new generation of nuclear-powered drones capable of flying over remote regions of the world for months on end without refuelling. 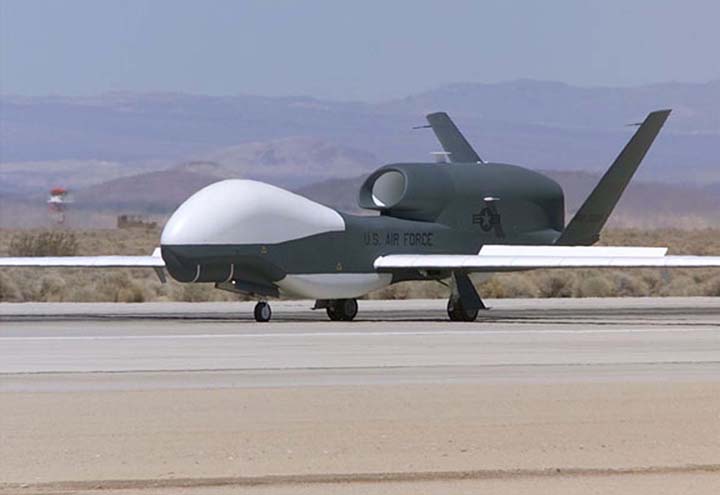 Smoke was seen rising from brush fires in an unpopulated area near a tributary of the Nanticoke River shortly after 12.11pm on Monday.

There were no injuries or damage to property, a Navy spokeswoman said.

The RQ-4A Global Hawk drone had been on a test flight from the Naval Air Station Patuxent River when military personnel lost contact with the unmanned craft, a Navy spokeswoman for the Unmanned Aviation and Strike Weapons Programme at the base said.

A piloted aeroplane was dispatched upon losing contact and later spotted the wreckage on the east coast of Maryland near Bloodworth Island in Dorchester County, the Navy said.

The felled drone is one of five in the Air Force’s Hawk programme, which has been developing tactics for high-altitude patrol vessels since November 2006. Four are believed to be used in routine training at the Naval Air Station and one is with the US Navy’s Fifth Fleet, which covers much of the Middle East, including the Red Sea, the Persian Golf and part of the east African Coast.

This type of drone, which is typically 44ft long with a wing span of 116ft, is usually deployed for reconnaissance missions and can fly for 30 hours at altitudes as high as 11 miles. It is operated by a crew of four on the ground.

It is considered one of the most advanced drones in the US military, costing around $176 million each. They have flown more than 5,500 hours in support of combat operations since 2008.

The area was blocked to recreational boat traffic by the US Coast Guard while the incident is investigated.