Will Spain’s bailout boost the markets on Monday? As Abram Brown points out the markets are eager for good news. But there are serious question marks over the bail out. Not least that the Spanish can’t seem to agree on what they have agreed to. And Euro zone members don’t actually know how they are going to pull off this refinancing.

What they believe they have done is create a plan that will ward off contagion if the Greek election goes against the pro-austerity parties Monday week. That might be unraveling already, as Spaniards take to the streets to protest against the deal. Add in to the mix, skepticism about the size of the rescue – $125 billion is just not enough some analysts are saying. The real figure is at least double that.

Among the remarkable features of Spain’s $125 billion bailout is the fact that nobody in Spain seems to know quite what the terms are. Twitter has been alive with speculation, and anger, for the past twenty four hours about the additional sovereign debt. The Spanish Prime Minister Mariano Rajoy finally made a live appearance at noon Spanish time today and described the bailout as a “line of credit” that does not affect the deficit.

Rajoy’s objective had always been to have funding supplied direct to banks. He has clearly failed in that. In fact his economics Minister, Luis de Guindos, yesterday insisted that at least the interest on the funding will add to Spain’s sovereign debt.

The confusion can be explained, in part, by the desire of Spanish politicians to avoid the humiliation of IMF involvement. The bailout seems to be coming from the EFSF – European Financial Stability Facility. The EFSF is a company set up by the Eurozone members that has the right to raise capital guaranteed by its member-state Governments.

Technically speaking, the EFSF can lend for bank recapitalization but it has to lend to Governments, and its lending is backed by other Euro zone members who have the right to monitor and inspect a lender’s banks. So Spain is not off the hook by any means. But the ability of Euro zone Governments to underwrite successive bailouts is also being questioned.

France and Germany, between them, guarantee nearly 50% of the facility. When the EFSF was used to support the Irish bailout its bond issue was vastly over-subscribed but since then questions have arisen over its capacity to keep lending. Italy, a country with its own serious sovereign debt problems, guarantees 18% of the facility.

That doubt is not necessarily going to hold the markets back this week. However, in Ireland, where they know a thing or two about real-estate induced bank debt, the feeling is Spain’s economy is in much more trouble than the Spanish Government is letting on.

Brian Lucey, a former Central Bank economist and now professor of finance at Trinity College, Dublin, has compared Irish and Spanish property prices over the course of the boom and bust cycle. They largely kept in step during the boom, but his point is that Spanish property prices have hardly begun to fall in comparison with Ireland’s – 25% vs 55% (see below) – since the bust began. Ireland’s property bust has cost the country Euro 65 billion in an economy one eight the size of Spain’s. Lucey thinks the Euro 100 billion will not even staunch the flow of blood. 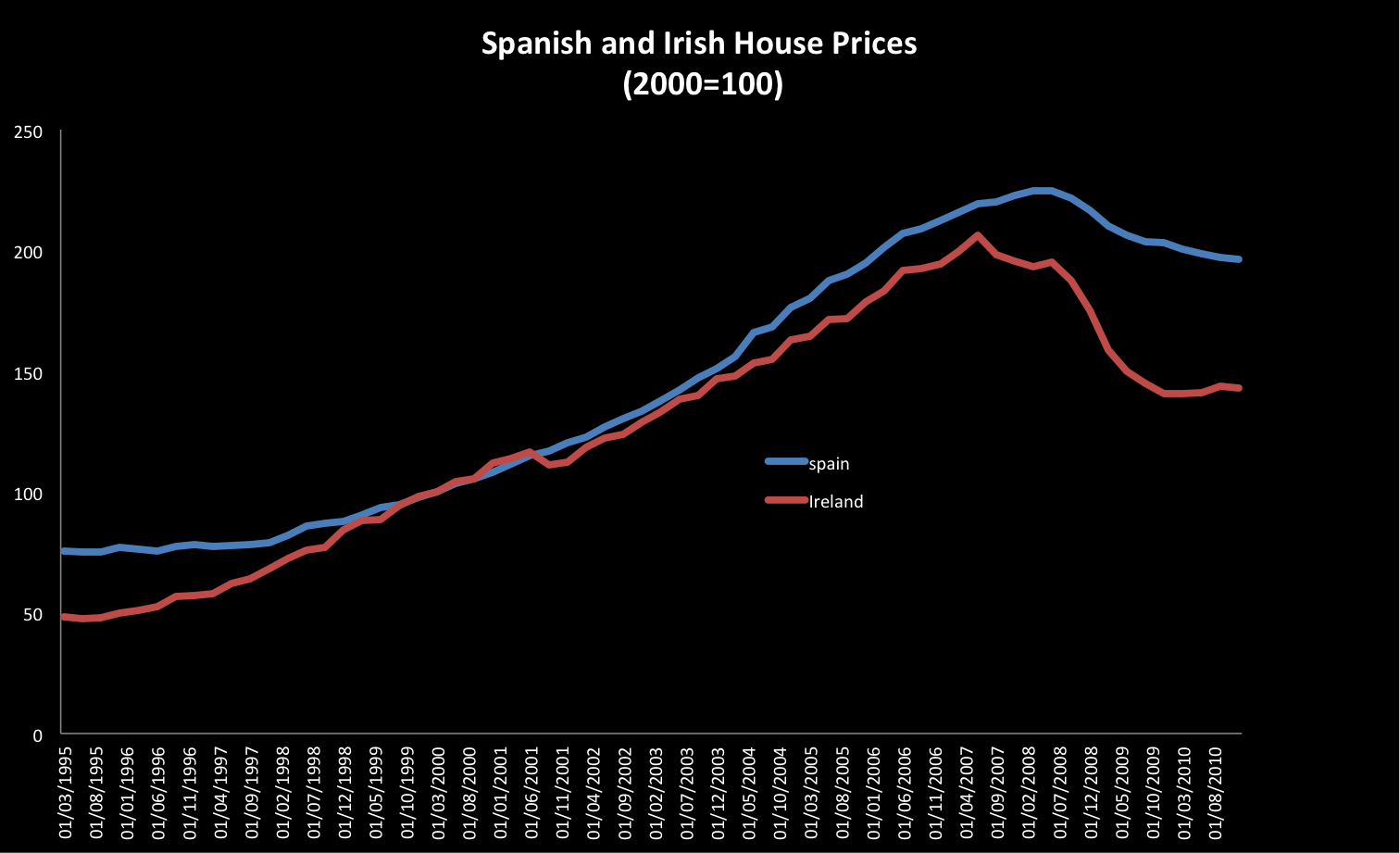