– Spain IS Greece After All: Here Are The Main Outstanding Items Following The Spanish Bailout (ZeroHedge, June 9, 2012):

After two years of denials, we finally have the right answer: Spain IS Greece. Only much bigger (it is also the US, although while the US TARP was $700 billion or 5% of then GDP, the just announced Spanish tarp is 10% of Spanish GDP, so technically Spain is 2x the US). So now that the European bailout has moved from Greece, Ireland and Portugal on to the big one, Spain, here are the key outstanding questions.

1. Where will the money come from?

De Guindos, Schauble and the Eurogroup, all announced that the sole source of cash would be the ESM and/or the EFSF. The problem with this is that the ESM has yet to be ratified by Germany, whose parliament said previously it is sternly against allowing the ESM to fund a direct bank bailout, something which just happened. Thus, the successful German ESM ratification vote, whenever it comes, and which previously was taken for granted, now appears to be far more questionable.

Which leaves the EFSF. The problem with the EFSF is that there is about €200 billion in dry powder. And this includes the Spanish quota of €93 billion, which we can only assume is now officially scrapped. 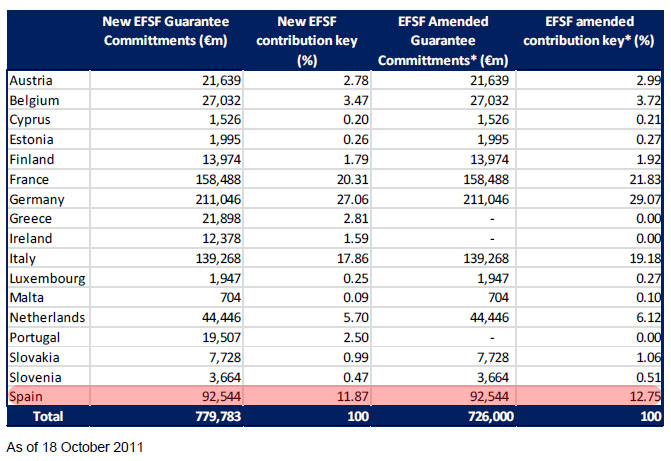 Which brings us to a bigger question: now that Spain is officially to be bailed out, what happens next. And by that we mean of course the big one: Italy. Recall that as we posted in Brussels… We Have A Problem, once the contagion spreads again to Italy, and that country also needs a bailout, it is game over. From the world’s biggest hedge fund Bridgewater:

In other words, it is very likely that the funding for the Spanish bailout will have yet to be procured. Who will provide cash which is virtually certain to disappear forever in the Spanish real-estate market mismarking vortex?

2. Where will the money go?

According to the de Guindos press conference, the bailout cash will go to the FROB, or the Fund for Orderly Bank Restructuring: as the name implies a sinking fund to fund insolvent banks. This is merely a liquidity vehicle to net out evaporating capital due to realistic marks of assets, or ongoing deposit flight. However, a far bigger concern is how will the FROB be treated from a sovereign debt perspective?

As was noted previously, the bailout will come in the form of a loan, which while at better terms than market, will still result in a material increase in Spanish debt/GDP. In other words, while the bailout itself may have been without sovereign conditions, it will still impair the country in the eyes of sovereign creditors. And just as important is the mention that the loan will have “better terms than market” – this implies added security compared to general Spanish obligations. Hence priming.

Now we have another €100 billion or so in admitted sovereign debt to add to the top of the list. In other words, total Spanish admitted debt will likely increase by up to 17% from $732 billion to $857, adding the $125 billion FROB “loan.”

3. What happens to Spanish sovereign debt?

Perhaps the most important thing to note in the above analysis is that the FROB loan is effectively a priming DIP: think Troika loans to Greece, Ireland and Portugal.

In other words, Spanish bondholders just got their first taste of subordination!

Basically, first thing Monday the trade off will be: does the temporary improvement in bank solvency offset the fact that bonds just got primed, hinting at a future that in the case of Greece has resulted in the old Greek bonds trading an equivalent price of sub 10 cents on the dollar.

How long until Spanish bondholders get the hell out of Dodge, knowing quite well that their Spanish bond holdings will suffer the same fate as GGBs?

Our advice for those who need to have exposure, as we wrote 5 months ago: sell local-law, covenant-lite Spanish bonds, and buy their UK-law, covenant-protected cousins.

Then sit back and watch the spread explode.

Naturally with Spain now officially biting the bullet, the only question remaining is: when is Italy going to drop next.

And ironically, what just happened, is that the Eurozone, with the tacit agreement of Germany, essentially gave insolvent banks a green light to short themselves into a full bailout.

How long until Italian banks get the hint, and proceed to short each other, or themselves, either with shares of stock or , better yet, through CDS which unlike in the sovereign case, can be held without an offsetting cash basis position. In other words: is it time for the Italian bank suicide trade?

Because only when they are on the verge of nationalization, will Italian banks be rescued. And remember: he who defects (or in this case drops the fastest), first, reaps the biggest benefits of the resultant action.

We also wonder how will Ireland feel knowing that it has to suffer under backbreaking austerity in exchange for Troika generosity, while Spain gets away scott free.

Finally, there is the question of how today’s action will impact the Greek elections. As noted earlier today, today’s precedent will likely serve as a huge boost to the popularity of Syriza. Oh yes, the Greek elections next Sunday. Remember those, and the whole Grexit thing?

The long-term reaction is obvious: this latest confirmation that Europe is a sinking ship has been predicted by many for years. As such, that European risk markets will continue sinking, and capital flows continue rushing to Germany, is a given. In the short run, however, courtesy of a new all time record high number of EUR shorts (at a record -214,418 net non-commercial contracts as of this past week) it is likely we may see an aggressive short covering squeeze. 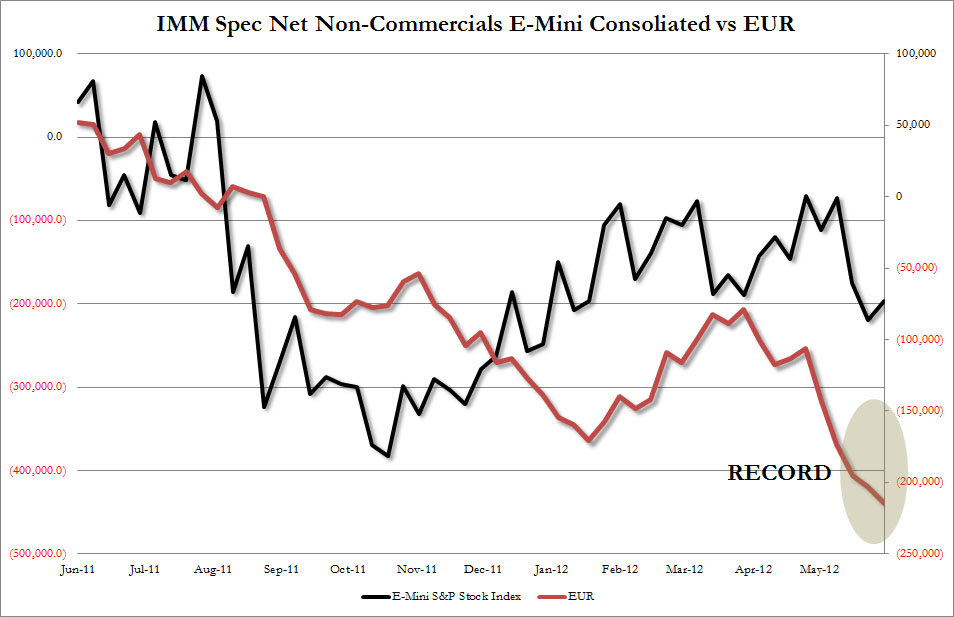 This will send all risk higher as well. Of course, the really is to be faded aggressively as soon as the weak-hand shorts capitulate and cover.

For those curious just what this mysterious FROB is, which simply stated is, or rather was, a woefully underfunded FDIC equivalent, and is now the Spanish banking system loophole, here is a succinct presentation: