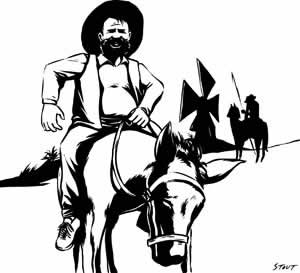 Spain has now officially asked the European Union for aid for its banks. The markets seem to be responding as if the bank issue is isolated. It is not isolated. We are following the same schematic as we did with Ireland; first it was the banks and then it was the country and then the “Men in Black” showed up to take over. Spain says it is a 50 billion Euro problem and the reality is probably more like a 400 billion Euro problem. There is all kinds of cross lending between the banks in Spain and while Spain’s largest two banks have tried everything they could to isolate themselves; I predict there will be no escape for anyone. Now that Spain has asked for a bailout of their banks the European auditors will show up and I would bet large money that the values of many loans and the value of Real Estate and the securitizations tied to it will be found to have been vastly overstated. Then it will be the regional governments and their debts and the house of cards will implode. The Spanish Finance Minister kicked off the first domino this morning and we can all just stand by now and watch the rest fall.

Bear in mind that the current Stabilization Fund in Europe, not the one that is not even yet in existence, has nowhere near the capital to shore up the Spanish banks much less the country. The G-7 is having an emergency meeting about Spain this morning and while there is a lull presently; it will not last. The periphery nations, led by Spain, are pushing on Germany and the funding nations to step-in but the cost will be very high and a huge loss of sovereignty. I doubt if many in Europe understand the price that will be extracted which will be the EU taking over Spain’s financial system, taxes and social services so that Brussels/Berlin will control the country. Spain arrived at the precipice, as I have predicted many times and this morning; they have fallen over the edge.

So long and thanks for all the sardines!

Sancho is no longer fighting with windmills this morning. Notions of some charming book or a small foray into the countryside have been replaced by a much more serious confrontation where Germany will demand vengeance for the irresponsible behavior of Spain. Make no mistake here, don’t get fooled again; Spain is going to come under the heel the jackboot and applying what motives you may to Germany will make little difference in the end. The current government of Spain will no longer be in control. First it will be the banks and then the regional debt and, recognizing the inevitable yet or not; the end-game began this morning. Spain is done!

-I’ll be Seeing You