Mitt Romney will become one of the richest ever occupants of the White House if he wins the presidential election, after his campaign confirmed he was worth up to $250 million. 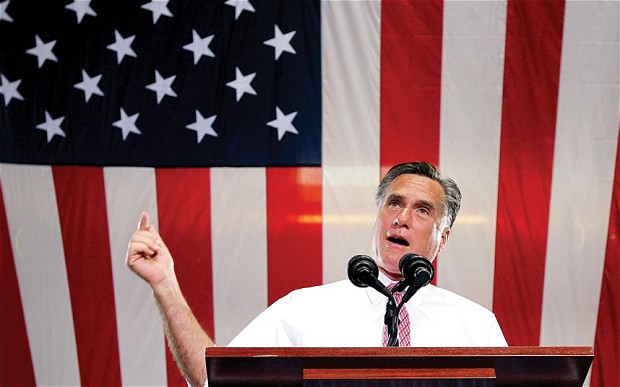 The records also show that Mitt Romney sold off much of his overseas investments in the last year, including controversial holdings in the Chinese-owned companies Hang Lung and Komatsu Photo: Getty Images

The Republican candidate disclosed his net worth, around £163 million, in a financial declaration to the Federal Election Commission which provided new details of his personal fortune.

A campaign spokesman said the former Massachusetts Governor and his wife Ann had assets of between $190 million and $250 million. Experts claimed analysis of his holdings suggested his wealth was closer to the upper figure.

The family has another $100 million (£65 million) in a separate trust for Mr Romney’s five sons.

The candidate’s exact net worth had been unclear until now, although it had been estimated in the $200 million to $250 million range after he disclosed that in 2010 he had paid taxes of $3 million (£1.9 million) on income of $21.7 million (£14 million). Because most of his wealth derived from capital gains, he was able to pay tax at a far lower rate than most Americans.

The records also show that Mr Romney sold off much of his overseas investments in the last year, including controversial holdings in the Chinese-owned companies Hang Lung and Komatsu, which have been criticised for doing business with Iran, and British Sky Broadcasting.

He shed holdings in Walmart De Mexico, which has been at the centre of a corruption scandal in recent months, and Freddie Mac and Fannie Mae, the much-criticised, US government-sponsored mortgage associations.

Experts suggested he was seeking to divest himself of links to companies which could be frowned on by American voters and to avoid muddling his political position, having repeatedly called for a tougher stance on Chinese economic expansionism and Iran’s nuclear ambitions.

Mr Romney also sold stock in Procter & Gamble, Aflac, American Express, Apple, ExxonMobil, Google and JPMorgan Chase, which had been managed for him by Goldman Sachs and Thornburg Investment Management.

The return shows that in addition, the former Governor derived substantial income from holdings in investments linked to his former company, Bain Capital, as part of his retirement package from the firm.

Andrea Saul, a spokesman for the Romney campaign, said: “Governor and Mrs Romney’s assets are managed on a blind basis.

“They do not control the investment of these assets, which are under the control and overall management of a trustee.”

In 2007, ahead of his first run at the presidency, Mr Romney promised that he would instruct his trustee to ensure that his investments did not clash with his ideals or the policies of the Republican Party.

However, it now appears that the trust retained shares in Chinese and other overseas’ companies for several more years.

Although an enormously wealthy man by any standards, Mr Romney will not be the richest person to hold the presidency if he wins the election in November.

According to a presidential rich list compiled by Forbes, that title is held by George Washington, American’s first president. He owned vast land holdings in what is now West Virginia, much of which was farmed by slaves, making him worth an estimated $500 million (£325 million) in today’s money.

Mining mogul Herbert Hoover, who came to the presidency in 1929, is estimated to have built up a vast fortune, making around $2.5 million (£1.6 million) a year – about $27 million (£18 million) in today’s money – in the decades before he entered the White House.

Thomas Jefferson, 1801 to 1809, had inherited wealth, putting him third place in the Forbes list, although he is known to have frittered much of it away during his presidency.

Mr Romney could be in fourth place in the rich list if he is successful at the polls, Forbes said.

In his formal declaration to the Federation Election Commission, the Romney campaign provided a broad estimate of his wealth, putting it at between $83 million (£54 million) and $255 million (£166 million), but his spokesman issued a statement narrowing those figure to between $180 and $250 million.