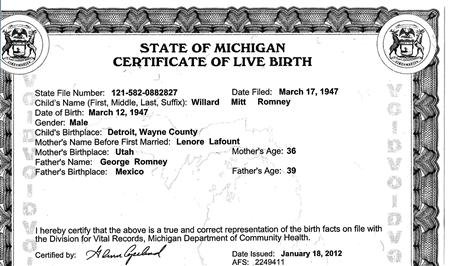 WASHINGTON (Reuters) – Finally, there is definitive proof: The presidential candidate was born in the United States, and his father was not.

Yes, Republican Mitt Romney appears eligible to be president, according to a copy of Romney’s birth certificate released to Reuters by his campaign. Willard Mitt Romney, the certificate says, was born in Detroit on March 12, 1947.

His mother, Lenore, was born in Utah and his father, former Michigan governor and one-time Republican presidential candidate George Romney, was born in Mexico.

So on a day when real estate and media mogul Donald Trump was trying to help Mitt Romney by stirring up a new round of questions about whether Democratic President Barack Obama was born in the United States, Romney’s own birth record became a reminder that in the 1968 presidential campaign, his father had faced his own “birther” controversy.

Back then, George Romney – who died in 1995 – was a moderate who was challenging eventual President Richard Nixon in the Republican primaries.

Records in a George Romney archive at the University of Michigan describe how questions about his eligibility to be president surfaced almost as soon as he began his short-lived campaign.

In many ways, they appear to echo today’s complaints that Trump and some other conservative “birthers” have made about Obama while questioning whether Obama – whose father was from Kenya and mother was from Kansas – was born in Hawaii.

In George Romney’s case, most of the questions were raised initially by Democrats who cited the Constitution’s requirement that only a “natural born citizen” can be president.

As early as February 1967 – a year before the first 1968 presidential primary – some newspapers were raising questions as to whether George Romney’s place of birth disqualified him from the presidency.

By May 1967, U.S. congressman Emmanuel Celler, a Democrat who chaired the House of Representatives Judiciary Committee, was expressing “serious doubts” about George Romney’s eligibility.

The next month, another Democratic congressman inserted a lengthy treatise into the Congressional Record in which a government lawyer – writing in a “personal capacity” – argued that George Romney was ineligible for the White House because he was born outside U.S. territory.

In what today might seem like deja vu, eminent legal authorities soon were queuing up to argue in favor of George Romney’s eligibility.

The New York Law Journal published a lengthy argument by a senior partner from Sullivan & Cromwell, one of Manhattan’s elite law firms, arguing that the fact that both of George Romney’s parents were U.S. citizens clearly established him as a “natural born citizen” who was eligible to be president.

George Romney himself was unequivocal.

“I am a natural born citizen. My parents were American citizens. I was a citizen at birth,” he said, according to a typewritten statement found in his archives.

At one point, the Congressional Research Service – an arm of the Library of Congress that is supposed to provide authoritative but impartial research for elected members – advised that its analysts agreed with George Romney, according to a congressional source.

In a paper in November aimed at clarifying presidential eligibility, the Congressional Research Service declared that the practical, legal meaning of “natural born citizen” would “most likely include” not only anyone born on U.S. soil but anyone born overseas of at least one parent who was a U.S. citizen.

Mitt Romney has tried to avoid getting caught up in Trump’s focus on Obama’s birthplace.

“Governor Romney has said repeatedly that he believes President Obama was born in the United States,” said Eric Fehrnstrom, a senior adviser to Romney.

However, the presumed Republican nominee has not distanced himself from Trump, creating what some analysts said seems to be a quiet endorsement of Trump’s efforts to raise questions about Obama among voters.

Michael Cohen, special counsel to Trump, said that Trump and Romney never talk about issues Trump has raised elsewhere regarding Obama’s birth certificate. Instead they talk about jobs, the economy and other matters of public policy.

Cohen said Trump recently revived the issue of Obama’s birthplace because journalists asked him about the issue after a right-wing website published an old blurb for an Obama book that suggested that Obama was born in Kenya. The literary agent who wrote the blurb subsequently said it was written in error.

Cohen said Trump believes “the president of the United States should be the single most transparent human being on this planet. This president lacks that transparency.”

– Obama’s Literary Agent Says He Was ‘Born In Kenya’. How Did The Mainstream Media Miss This? (Telegraph)

– New Report Of Obama’s Birth In Kenya (The Hill)

– The Vetting – Exclusive – Obama’s Literary Agent In 1991 Booklet: ‘Born In Kenya And Raised In Indonesia And Hawaii’ (Breitbart)

– Arizona Sheriff Joe Arpaio On Obama’s Birth Certificate And Selective Service Registration Card: ‘Probable Cause Exists Indicating That Forgery And Fraud May Have Been Committed’ (Video)