A new mobile phone with an inbuilt radiation detector has been unveiled in Japan, tapping into the nation’s continued fears following last year’s nuclear crisis. 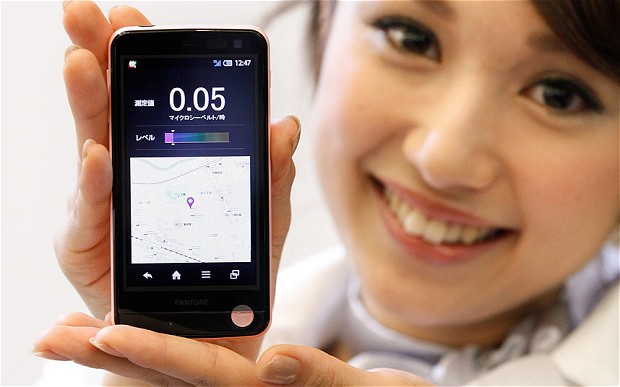 The Sharp Pantone 5 107SH, a smartphone with built in radiation detector

The new smartphone, developed by Softbank Corp, is believed to be the first of its kind to contain inbuilt radiation sensor chips designed to measure radiation exposure by the hour.

The mobile phone, which will go on sale this summer, is also able to keep track of each location tested by the user for radiation levels, in order to create a wider picture of Japan’s atomic hot spots.

Masayoshi Son, founder and president of Softbank and an outspoken critic of nuclear power, described how the new phone presented a more portable, affordable and user-friendly alternative to a conventional Geiger counter.

“The threat from the nuclear accident cannot be seen by the human eye and continues to be a concern for many people, especially for mothers with small children,” he said.

Its arrival is timely, as anti-nuclear sentiments continue to run high in Japan more than a year after the March 11 earthquake and tsunami triggered the world’s worst nuclear crisis in decades at Fukushima nuclear plant.

For many Japanese, lingering concerns remain in terms of long-term radiation contamination of the atmosphere, sea, soil and food chains, while swathes of the northeast continue to remain off-limits.

A string of popular phone applications have been launched in Japan since the disaster designed to monitor radiation levels across the country, many involving the attachment of a portable dosimeter.

However, the new Softbank smartphone is believed to be the first of its kind to incorporate a diminutive radiation detector within the design of the device.