In other related news:

Chicago police and security personal are set for what they seem to believe will be a full scale battle with protesters during this weekends NATO Summit.

With numerous protest groups set to launch widespread protests throughout the weekend, the police state is out like never before.

In a move eerily reminiscent of the Soviet Union and East Germany, multiple activists were arrested and literally disappeared just days before the summit.

An article published by RT quoted a National Lawyers Guild spokesman in regards to the pre crime arrests:

Hermes adds to the Tribune that “there’s absolutely no evidence of wrongdoing,” and that law enforcement officers were simply trying to make the activists “disappear” days before police expect major anti-NATO protests in Chicago.

“We were literally calling all morning and all afternoon to try to contact these people,” Hermes says. “That’s why we used the term ‘disappeared.’ ”

In a separate statement offered to an NBC News station in Chicago, Hermes adds,

“The city has so far not indicated the reasons for the raid, what they are charging the protesters with, nor provided any evidence of wrongdoing” and that the NLG was still seeking a copy of the search warrant used in the raid.

“Preemptive raids like this are a hallmark of National Special Security Events,” Sarah Gelsomino of the National Lawyers Guild and the People’s Law Office adds in a press release.

“The Chicago police and other law enforcement agencies should be aware that this behavior will not be tolerated and will result in real consequences for the city.”

The search warrant was not shown to those arrested for 4 hours after the arrest and was missing a signature from a judge. (making the warrant completely illegal)

That’s right, we now live in a country where the FBI and Secret Service are used to disrupt and hurt American citizens who are attempting to express their first amendment rights.

These plans are very telling, especially when you consider Obama recently condemned Iran and Syria for carrying out similar actions.

Many citizens have also questioned why the entire city should suffer simply because NATO globalists are meeting to discuss continued world domination.

Security around the NATO Summit will be at an all time high, giving police and security forces a chance to use their high tech police state weapons on live crowds.

With the city of Chicago investing at least a million dollars in riot control equipment and warning the Red Cross of possible evacuations, things are sure to get extremely hairy.

Top that off with recently spotted army vehicles headed towards Chicago and you have a recipe for an extremely violent weekend. 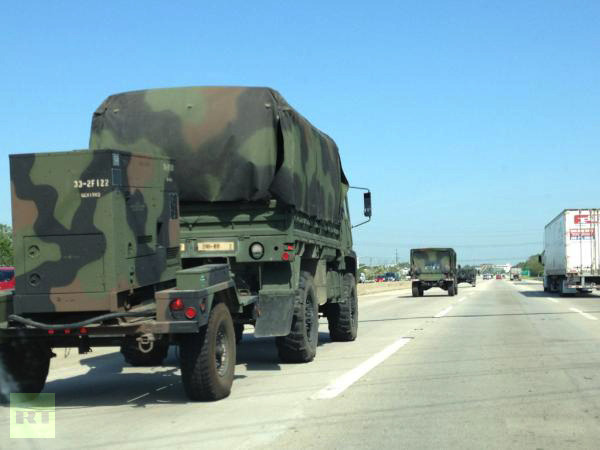