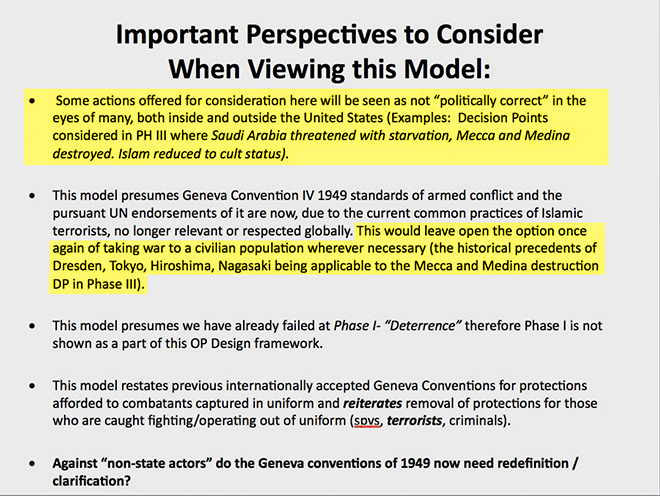 The U.S. military taught its future leaders that a “total war” against the world’s 1.4 billion Muslims would be necessary to protect America from Islamic terrorists, according to documents obtained by Danger Room. Among the options considered for that conflict: using the lessons of “Hiroshima” to wipe out whole cities at once, targeting the “civilian population wherever necessary.”

The course, first reported by Danger Room last month and held at the Defense Department’s Joint Forces Staff College, has since been canceled by the Pentagon brass. It’s only now, however, that the details of the class have come to light. Danger Room received hundreds of pages of course material and reference documents from a source familiar with the contents of the class.

The chairman of the Joint Chiefs of Staff recently ordered the entire U.S. military to scour its training material to make sure it doesn’t contain similarly hateful material, a process that is still ongoing. But the officer who delivered the lectures, Army Lt. Col. Matthew A. Dooley, still maintains his position at the Norfolk, Virginia college, pending an investigation. The commanders, lieutenant colonels, captains and colonels who sat in Dooley’s classroom, listening to the inflammatory material week after week, have now moved into higher-level assignments throughout the U.S. military.

For the better part of the last decade, a small cabal of self-anointed counterterrorism experts has been working its way through the U.S. military, intelligence and law enforcement communities, trying to convince whoever it could that America’s real terrorist enemy wasn’t al-Qaida — but the Islamic faith itself. In his course, Dooley brought in these anti-Muslim demagogues as guest lecturers. And he took their argument to its final, ugly conclusion.

“We have now come to understand that there is no such thing as ‘moderate Islam,’” Dooley noted in a July 2011 presentation (.pdf), which concluded with a suggested manifesto to America’s enemies. “It is therefore time for the United States to make our true intentions clear. This barbaric ideology will no longer be tolerated. Islam must change or we will facilitate its self-destruction.”

Dooley could not be reached for comment. Joint Forces Staff College spokesman Steven Williams declined to discuss Dooley’s presentation or his status at the school. But when asked if Dooley was responsible for the course material, he responded, “I don’t know if I would classify him [Dooley] as responsible. That would be the commandant” of the school, Maj. Gen. Joseph Ward.

That makes the two-star general culpable for rather shocking material. In the same presentation, Dooley lays out a possible four-phase war plan to carry out a forced transformation of the Islam religion. Phase three includes possible outcomes like “Islam reduced to a cult status” and “Saudi Arabia threatened with starvation.” (It’s an especially ironic suggestion, in light of today’s news that Saudi intelligence broke up the most recent al-Qaida bombing plot.)

International laws protecting civilians in wartime are “no longer relevant,” Dooley continues. And that opens the possibility of applying “the historical precedents of Dresden, Tokyo, Hiroshima, Nagasaki” to Islam’s holiest cities, and bringing about “Mecca and Medina[‘s] destruction.”

Dooley’s ideological allies have repeatedly stated that “mainstream” Muslims are dangerous, because they’re “violent” by nature. Yet only a few of al-Qaida’s most twisted fanatics were ever caught musing about wiping out entire cities.

“Some of these actions offered for consideration here will not be seen as ‘political correct’ in the eyes of many,” Dooley adds. “Ultimately, we can do very little in the West to decide this matter, short of waging total war.”

Dooley, who has worked at the Joint Forces Staff College since August 2010, began his eight-week class with a straightforward, two-part history of Islam. It was delivered by David Fatua, a former West Point history professor. “Unfortunately, if we left it at that, you wouldn’t have the proper balance of points of view, nor would you have an accurate view of how Islam defines itself,” Dooley told his students. Over the next few weeks, he invited in a trio of guest lecturers famous for their incendiary views of Islam.

Shireen Burki declared during the 2008 election that “Obama is bin Laden’s dream candidate.” In her Joint Forces Staff College lecture, she told students that “Islam is an Imperialist/Conquering Religion.” (.pdf)

Stephen Coughlin claimed in his 2007 master’s thesis that then-president George W. Bush’s declaration of friendship with the vast majority of the world’s Muslims had “a chilling effect on those tasked to define the enemy’s doctrine.” (.pdf)  Coughlin was subsequently let go from his consulting position to the military’s Joint Staff, but he continued to lecture at the Naval War College and at the FBI’s Washington Field Office. In his talk to Dooley’s class (.pdf), Coughlin suggested that al-Qaida helped drive the overthrow of Egyptian strongman Hosni Mubarak and Libyan dictator Muammar Gadhafi. It was part of a scheme by Islamists to conquer the world, he added. And Coughlin mocked those who didn’t see this plot as clearly as he did, accusing them of “complexification.”

Coughlin titled his talk: “Imposing Islamic Law – or – These Aren’t the Droids Your Looking For!”

Former FBI employee John Guandolo told the conspiratorial World Net Daily website last year that Obama was only the latest president to fall under the influence of Islamic extremists. “The level of penetration in the last three administrations is deep,” Guandolo alleged. In his reference material for the Joint Forces Staff College class, Guandolo not only spoke of today’s Muslims as enemies of the West. He even justified the Crusades, writing that they “were initiated after hundreds of years of Muslim incursion into Western lands.”

Guandolo’s paper, titled “Usual Responses from the Enemy When Presented With the Truth” (.pdf), was one of hundreds of presentations, documents, videos and web links electronically distributed to the Joint Forces Staff College students. Included in that trove: a paper alleging that “it is a permanent command in Islam for Muslims to hate and despise Jews and Christians” (.pdf). So was a video lecture from Serge Trifkovic, a former professor who appeared as a defense witness in several trials of Bosnian Serb leaders convicted of war crimes, including the genocide of Muslims. A web link, titled “Watch Before This Is Pulled,” supposedly shows President Obama — the commander-in-chief of the senior officers attending the course — admitting that he’s a Muslim.

Dooley added the caveats that his views are “not the Official Policy of the United States Government” and are intended “to generate dynamic discussion and thought.” But he taught his fellow military officers that Obama’s alleged admission could well make the commander in chief some sort of traitor. “By conservative estimates,” 10 percent of the world’s Muslims, “a staggering 140 million people … hate everything you stand for and will never coexist with you, unless you submit” to Islam. He added, “Your oath as a professional soldier forces you to pick a side here.” It is unclear if Dooley’s “total war” on Muslims also applied to his “Muslim” commander in chief.

After the Pentagon brass learned of Dooley’s presentation, the country’s top military officer, Joint Chiefs of Staff Chairman Gen. Martin Dempsey, issued an order to every military chief and senior commander to get rid of any similar anti-Islam instructional material. Dempsey issued the order because the White House had already instructed the entire security apparatus of the federal government — military and civilian — to revamp its counterterrorism training after learning of FBI material that demonized Islam.

By then, Dooley had already presented his apocalyptic vision for a global religious war. Flynn has ordered a senior officer, Army Maj. Gen. Frederick Rudesheim, to investigate how precisely Dooley managed to get away with that extended presentation in an official Defense Department-sanctioned course. The results of that review are due May 24.

Ironically, Dooley and his guest lecturers paint a dire picture of the forward march of Islamic extremism right as its foremost practitioner feared its implosion. Documents recently declassified by the U.S. government revealed Osama bin Laden fretting about al-Qaida’s brutal methods and damaged brand alienating the vast majority of Muslims from choosing to wage holy war. Little could he have known that U.S. military officers were thinking of ways to ignite one.