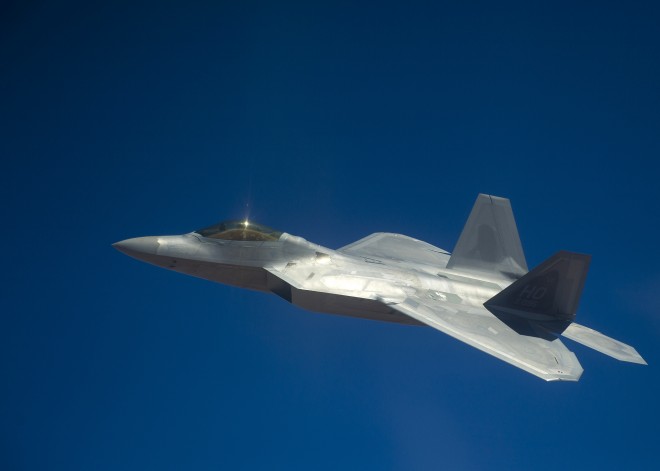 The Air Force is continuing disciplinary action against one of the Air Force pilots who refused to fly the F-22 Raptor stealth fighter because the pricey jet’s faulty oxygen system was steadily poisoning him. Capt. Josh Wilson, from the Virginia Air National Guard, has been granted whistleblower protection under federal law — a status the Air Force has publicly acknowledged. But that hasn’t stopped the flying branch from beginning a process that may very well threaten to end the pilot’s career.

Wilson and Maj. Jeremy Gordon, also a Raptor pilot with the Virginia Guard, stopped flying the $400-million-per-copy F-22 after they and dozens of other pilots reported in-flight symptoms consistent with oxygen deprivation, including confusion and blackouts. The Air Force temporarily grounded some or all of its roughly 180 Lockheed Martin-made Raptors twice last year so it could study the jet’s onboard oxygen generator.

When the flying branch failed to pinpoint the problem, as a stopgap measure it installed an extra carbon filter in the F-22′s oxygen system then ordered the pilots back in the air for an intensifying program of training exercises and deployments. But the carbon filter was faulty, too, and shed black dust into the pilots’ masks. F-22 fliers began coughing up black phlegm. Ground crews who spent time in the Raptor’s cockpit also reported symptoms. Air Force doctors advised the aviators to stand down.

Wilson and Gordon were the only pilots who refused to get back into the cockpit — that we know of. But in an interview broadcast Sunday the pilots told 60 Minutes that a “vast, silent majority” of the Air Force’s 200 or so Raptor fliers feared for their health or their lives. Gordon’s flight qualification soon expired. Wilson, the younger and less experienced of the two, faced a harsher punishment. The Air Force sent him a letter of reprimand that Frederick Morgan, the two pilots’ Ohio-based lawyer, says is just the first step in a potentially career-ending disciplinary process.

In addition to seeking legal counsel, Wilson and Gordon appealed to Rep. Adam Kinzinger, himself an Air Force pilot, for protection under the federal whistleblower law. Kinzinger and Sen. Mark Warner issued a letter Thursday urging the military not to mess with these pilots — or any others that bring up problems with the Raptor.

“We need to make sure there is a culture in which others feel safe coming forward,” Warner wrote.

The Air Force acknowledges the protected status. “Air Force leadership has made clear that the we are treating the pilots as whistleblowers,” service spokesman John Dorrian tells Danger Room.

But Wilson’s disciplinary action continues all the same, Morgan tells Danger Room. “They didn’t rescind the letter.” Fearing for his career, Wilson has offered to resume flying. “He’s eager not to be disciplined,” Morgan says.

Regarding the letter of reprimand, Dorrian says he cannot comment on private personnel matters. He refers Danger Room to the Air National Guard, but warns that the Guard, too, probably will not comment on any pilot’s individual case.

The Air Force did remove the carbon filters that Morgan says only “made the problem worse.” That was some comfort to Wilson and Gordon, according to Morgan. Now Gordon says he’ll get back in the cockpit, too — but only to help the Air Force work on fixing the oxygen problem. “All these guys want is for the airplane to work,” Morgan says.

This battle is far from over. While the Air Force mulls over Wilson’s and Gordon’s offers, the pilots along with their lawyer are meeting with Air Force doctors and Sen. Mark Warner, a new ally alongside Rep. Kinzinger. Maybe Warner can get the Air Force to explain how whistleblower protection should not stop Wilson’s ongoing disciplinary action.