While virtually everyone has opined on the topic of the massive fiscal “cliff” set to take place on January 1, 2013, which could crush US GDP unless American politicians manage to find a way to end their acrimonious ways, most forget that a far more tangible cliff is set to take place much sooner, specifically over the next several months, as those currently collecting handouts from the government in the form of extended unemployment benefits (i.e., those who have been out of a job for a year) are about to get as angry as Germants pre-funding TARGET3, once the free money stops. Goldman explains why: “First, more than 150,000 workers per month exhaust their allowed benefits. Second, recently legislated thresholds will reduce benefit eligibility in many states with below-average unemployment rates beginning in June. Third, apart from legislative changes, labor market improvement in some states has taken the state-level unemployment rate below eligibility thresholds, with many states looking at likely expiration of one or more tiers of benefits around mid-year.” In other words, unlike the bulk of other transfer payment programs (read government subsides) which could be extended with the flick of a switch at the end of the year following the now traditional 1+ month congressional theatrical impasse, extended claims can not. The net result: by June some 700,000 people who are currently collecting benefits will lose everything. It seems that the old faithful EBT card is about to be denied- and while one can assume that extended benefits are not a core source of marginal aspirational product (read AAPL) sales, we all know the truth. Is the time finally coming to short the one company that is and has always been the primary beneficiary of government transfer payment largesse? Because if AAPL’s recent shakiness has been, by some, attributed to the expiration of EBTs, what will happen when Americans are again forced to pay their mortgages? 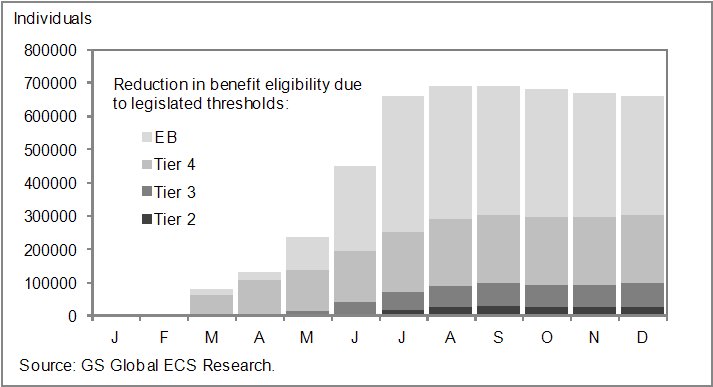 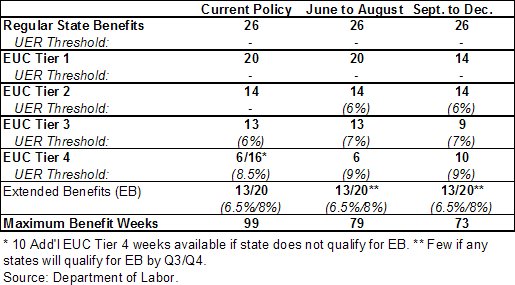 Goldman explains the reasons for this dramatic cliff:

Over the next several months, eligibility for federally funded jobless benefits will decline. This is due in part to legislative changes over the last few months, and in part to broader economic factors. In particular, there are three factors likely to contribute to reduced benefit eligibility and increased exhaustion of benefits over the coming year:

The upshot is that by around August roughly 700,000 jobless workers will no longer qualify for benefits who would have otherwise qualified. The chart above shows the difference between the number of individuals who would receive benefits each month based on current policy compared with our projection of eligibility based on state-level unemployment rates.

In other words: lower spending, more claims, but at least Obama’s dream of showing a lower, or even negative (yes, it is absolutely possible if the participation rate drops below 58%) unemployment rate will come true. Too bad 700,000 more people will be living in a cave to see the inauguration.

Finally, from the conclusion:

At the end of 2012, benefits are scheduled under current law to expire altogether. Unlike previous scheduled expiration, where individuals would lose eligibility for benefits only after they exhausted their current “tier,” the current policy would cease paying benefits at the end of the year with no phase-down). Our current assumption is that benefits will expire altogether at that point; this could occur because of an agreement between the parties to allow them to expire, but like other policies set to expire (the so-called “fiscal cliff”), benefits could also cease because Congress fails to agree on any of the fiscal choices it faces at the end of the year. An additional phase-down of benefits rather than outright extension is certainly possible as an alternative scenario.

Perhaps it is time to start preparing the sequel to this video: My EBT… Has Been Rejected