The U.S. Department of Homeland security is working on a project called FAST, the Future Attribute Screening Technology. FAST will remotely monitor physiological and behavioural signals like elevated heart rate, eye movement, body temperature, facial patterns, and body language, and analyse these signals algorithmically for statistical aberrance in an attempt to identify people with criminal or terroristic intentions. 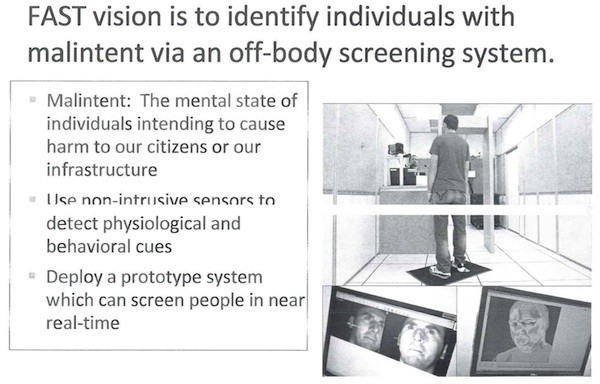 It’s useful to briefly talk about  a few of the practical problems that such a system would face.

Firstly, the level of accuracy in remote monitoring. Is it possible to engineer a system that can remotely tell you the heart-rate of a hundred passengers  passing through a TSA checkpoint? Yes. Is it possible to do so accurately? That is much, much harder. The obvious conclusion is that such a system, were it to be deployed in the wilds of airports (and presumably, other locations where our ever-benevolent technocratic overlords determine “terrorists” or “criminals” may be operating) would — given a large enough number of scans — produce a lot of false positives stemming from erroneous data.

But let’s assume that such a system can be calibrated to produce a relatively accurate data set. Now we are faced with the problem of defining “suspicious” behaviour. Surely a passenger with the flu or a cold — who might have an elevated body temperature and a faster heart rate — would set alarm bells ringing. So too would someone suffering from pre-flight anxiety, people taking certain medications, the elderly and so on. Given that TSA screening protocols have prevented precisely zero terrorist attacks on American soil since 9/11 (even in spite of the fact that 630 million passengers fly each year ) this merely suggests that vulnerable people will end up getting hassled by the TSA to an even greater extent than they already would be today. This is no laughing matter — a nervous but otherwise perfectly innocent passenger might end up getting tasered and die — something which of course has  happened multiple times already. Or —  under the NDAA (2011) — false-positives might end up being indefinitely detained on totally erroneous grounds.

Of course, the next problem is distinguishing the guilty from the innocent. Simply, this system would seem to produce nothing other than circumstantial evidence. Given that no crime would have yet been committed, how would it be possible to prove nefarious intent? Perhaps one day a terrorist or drug smuggler (got to keep fighting the war on drugs…) will be foolish enough to try to carry a gun or a knife through a TSA checkpoint and onto an aeroplane, but given that a metal detector could have detected that anyway, what is the point of this new technology? Surely it is to pinpoint potential terrorists who would otherwise not be picked out by the body scanners? In that case, would the end result just be that people — with no real evidence against other than a fast heart rate and some perspiration — end up being thrown off their flight? Would people who are subject to a false positive and as a result miss a flight try to sue the TSA for wasting their time and money?

Next, just as a committed and composed liar can fool a polygraph, surely terrorists and drug smugglers out in the wild would adapt their behaviour to avoid detection. There are of course prescription drugs that can be taken to reduce the physiological symptoms of anxiety, and thus fool the detector.

Then there are the problems in testing. Subjects in the laboratory trials (taxpayer-funded, of course) have been told to go through the system with the intent to cause a disruptive act. The system has been fine-tuned to detect subjects in a controlled laboratory environment. Simply, there is no data on the effectiveness of this system against terrorists in the wild. The wild is a totally different environment, and the mindset and physiological cues of a real terrorist may well be entirely different to those of a laboratory subject who is pretending (we just don’t know until we try it on a large enough sample of real terrorists). The notion that it can catch terrorist seems wholly pseudo-scientific, and based on the false premise that terrorism has an identifiable set of physiological cues. The entire operation is based on the (possibly flawed) premise that a terrorist will be nervous, and that therefore we should cast an extremely wide dragnet to further interrogate and intimidate nervous people. That is guesswork, not science.

As Alexander Furnas writing in the Atlantic states:

We should ask, in a world where we are already pass through full-body scanners, take off our shoes, belts, coats and only carry 3.5 oz containers of liquid, is more stringent screening really what we need and will it make us any safer? Or will it merely brand hundreds of innocent people as potential terrorists and provide the justification of pseudo-scientific algorithmic behavioral screening to greater invasions of their privacy?

It is ridiculous — and totally contrary to the Fourth Amendment — that the courts have franked the notion that air travellers can be subject to invasive pat-downs and body scans without probably cause. But they did. In U.S. vs Davis, 482 F.2d 893, 908 the judge ruled that ”airport screenings are considered to be administrative searches because they are conducted as part of a general regulatory scheme, where the essential administrative purpose is to prevent the carrying of weapons or explosives aboard aircraft” and that “an administrative search is allowed if no more intrusive or intensive than necessary, in light of current technology, to detect weapons or explosives, confined in good faith to that purpose, and passengers may avoid the search by electing not to fly.”

But to effectively conduct a medical scan on passengers? Surely this goes well beyond being “no more intrusive or intensive than necessary“? How many successful terrorist attacks occurred after 9/11, even before the more invasive pat-downs and body scans were brought in? None. So why would deepening the security regime be necessary?

And now that the TSA has expanded its regime beyond airports and out onto the roads of America we must ask ourselves what the endgame of all of this is? Could it be to deploy these technologies on a widespread basis throughout American cities, malls, sports stadiums and using it to scout out potential troublemakers? Would that be deemed an “administrative search” too (and thus not subject to the Fourth Amendment)?

This logic — of giving incontrovertible and unchallengeable power to our benevolent administrative overlords and then hoping for the best — takes us to a dark and nasty place. It requires us to assume they have our bests interests at heart, and it requires us to assume that they will not abuse their power. The power to monitor these kinds of cues is a power that could easily be abused. A corrupt TSA agent might call a person they find attractive — even a child — out of the queue for a secondary search so that he or she can molest them with an enhanced pat-down. These new tools just enhance that power, providing a cloak of pseudo-scientific justification to the reality of citizens bowing down at the feet of their government and kissing the ring of power. Unquestioning obedience to power is a recipe for social catastrophe.

As Jefferson put it:

Would I be picked out of the queue at the airport? Sure. I already am for my Arabic name. But I am nervous. And the things that make me nervous? Encroaching Orwellianism. The potential for the abuse of power. The potential for tyranny. The demand of unquestioning obedience. The money spent and debt accrued to develop these technologies. The fact that our governments are obsessed with terrorism to the extent that they will put tighter and tighter controls in place at airports, even though more people are crushed to death by furniture or televisions every year than are killed in terrorist attacks, while ignoring real threats to our society like excessive systemic risk in the global financial system.

That all scares the shit out of me.