While luckily not as powerful as last year’s Japanese earthquake, which in turn led to a catastrophic tsunami, this morning Indonesia has been battered by a series of magnitude 8+ quakes and aftershocks in the Banda Aceh and Sumatra regions of the country. Also unlike last year, the nature of the quake made it less likely a tsunami was generated because the earth moved horizontally, rather than vertically, and therefore had not displaced large volumes of water, Bruce Presgrave of the United States Geological Survey told the BBC. The geological map and update from the USGS below summarizes all the action we have seen to date. 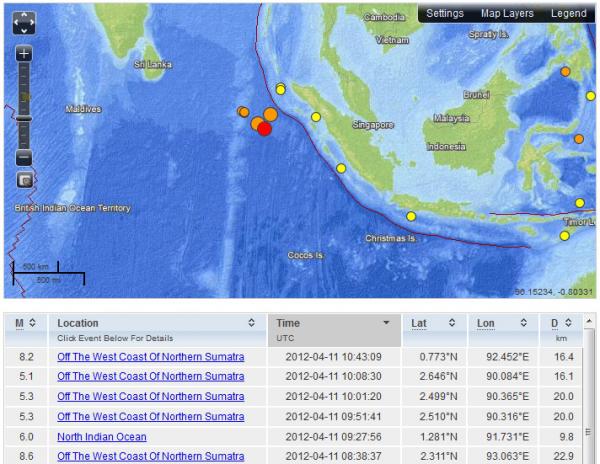 Below are some of the videos that have been released so far:

Reuters has a summary of the events so far:

An 8.7 magnitude earthquake struck off Indonesia on Wednesday, sending residents around the region scurrying from buildings and raising fears of a huge tsunami as in 2004, but authorities said there were no reports suggesting a major threat.

Indonesian President Susilo Bambang Yudhoyono said there were no immediate reports of casualties or damage in Aceh, the Indonesian province closest to the earthquake.

The quake struck at 0838 GMT and the Pacific Tsunami Warning Center said soon afterwards a tsunami watch was in effect for the entire Indian Ocean. It later said the threat of a big tsunami had receded, although the warning remained in place.

“It doesn’t look like a major tsunami. But we are still monitoring as tsunamis come in waves,” Victor Sardina, a geophysicist on duty at the Hawaii-based institute, told Reuters.

Individual countries, including Thailand, Indonesia, Sri Lanka and India, issued their own warnings.

People near the coast in six Thai provinces were ordered to move to higher ground and authorities shut down the international airport in the beach resort town of Phuket.

The quake struck 308 miles southwest of the city of Banda Aceh, on the northern tip of Indonesia’s Sumatra island, at a depth of 20.5 miles, the U.S. Geological survey said.

Indonesia’s disaster management agency said power was down in Aceh province and people were gathering on high ground as sirens warned of the danger.

“The electricity is down, there are traffic jams to access higher ground. Sirens and Koran recitals from mosques are everywhere,” said Sutopo, spokesman for the agency.

But Yudhoyono said there were no signs of a disaster.

“There is no tsunami threat although we are on alert,” said he said at a joint news conference in Jakarta with visiting British Prime Minister David Cameron, who said Britain was standing ready to help if needed.

“The situation in Aceh is under control, there’s a little bit of panic but people can go to higher ground,” Yudhoyono said.

Wednesday’s quake was felt as far away as the Thai capital, Bangkok, and in southern India, residents said.

Hundreds of office workers in the Indian city of Bangalore left their buildings while the Indian port of Chennai closed down because of the danger of a tsunami, the port said.

The quake was in roughly in the same area as the 2004 quake which was at a depth of 18 miles along a fault line running under the Indian Ocean, off western Indonesia and up into the Bay of Bengal.

One expert told the BBC the Wednesday quake was a “strike-slip” fault, meaning a more horizontal shift of the ground under the sea as opposed to a sudden vertical shift, and less risk of a large displacement of water triggering a tsunami.

The quake was also felt in Sri Lanka, where office workers in the capital, Colombo, fled their offices, and in Phuket, both of which were hit hard by the 2004 tsunami.