Fukushima prefecture is going to financially support local governments for tree thinning as forest decontamination as of April of 2012.

They are planning to use the logged trees for building materials of reconstruction and woody biomass fuel.

71% area is forest in Fukushima.

A month ago, Zero Hedge readers were stunned to learn that unemployment among Europe’s young adults has exploded as a result of the European financial crisis, and peaking anywhere between 46% in the case of Greece all they way to 51% for Spain. Which makes us wonder what the reaction will be to the discovery that when it comes to young adults (18-24) in the US, the employment rate is just barely above half, or 54%, which just happens to be the lowest in 64 years, and 7% worse than when Obama took office promising a whole lot of change 3 years ago. 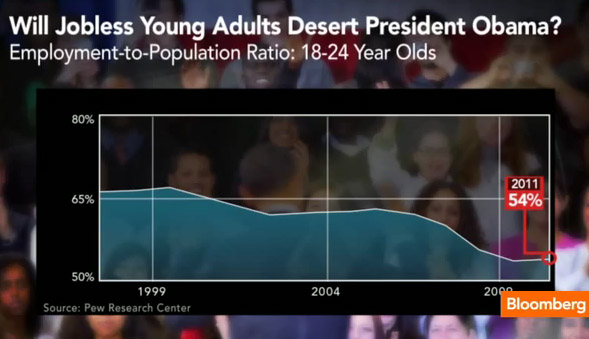 And while technically this means 46% are unemployed, or the same percentage as in Greece, the US ratio, which comes from Pew, shows the ratio as a % of the total population: a very sensitive topic now that every month we see another 250,000 drop off mysteriously from the total labor force. However, unlike those on the trailing age end, young adults by definition are the labor force in their age group demographic, so it would be difficult to explain away this horrendous number by claiming that ever more 24 year olds are retiring. Although, yes, we agree that some may be dropping out of the labor force in order to go to college, incidentally the locus of the latest credit bubble, where they meet a fate worse even than secular unemployment: they become debt slaves of the Federal System, with non-dischargable debt at that, which even assuming they can get a job would take ages to pay back!

But wait: there’s more – of all age groups, this is the one that has actually seen its wages drop the most under the Obama administration.

So not only are they unemployed, young adults are at least poor.

Unless February 29th is the new April Fool’s Day, I’m pretty sure  Alan Dlugash locked up DOTY with this remark:

People who don’t have money don’t understand the stress.   Could you imagine what it’s like to say I got three kids in private school, I have to think about pulling them out?   How do you do that?”

Dluglash is describing the horror of scraping by on $350,000 a year. Really. How could you lucky bastards ever understand?

Ordinary Americans, with their fancy foodstamps and foreclosure notices, are increasingly turning a blind eye to the plight of the people who outsourced their jobs.  You  just don’t get it, do you?    These people are light years smarter than you, and they work really hard.  Now things are so dire, some are actually considering sending their kids to school with your germy kids.   It’s bad.

Some have even been forced to shop for discount Salmon.  How could people who enjoy cat food ever understand that kind of humiliation?  If someone doesn’t halt this death spiral soon they may have to settle for Microsoft products (which even poor people hate).

This is all a joke, right?  Cause if it’s not, wait ’til they find out about Walmart….

Here’s a chart you won’t see anywhere in the mainstream media – not the right, and certainly not the left. According to Rasmussen’s 2012 Presidential Election Matchups, which pit Obama against any of the four GOP presidential candidates, while the balance of challengers certainly appear to have no chance of defeating the incumbent (something we touched upon yesterday), today, for the first time, Ron Paul has managed to unseat the standing president, by a thin margin of 43 to 41, for the first time in this series. 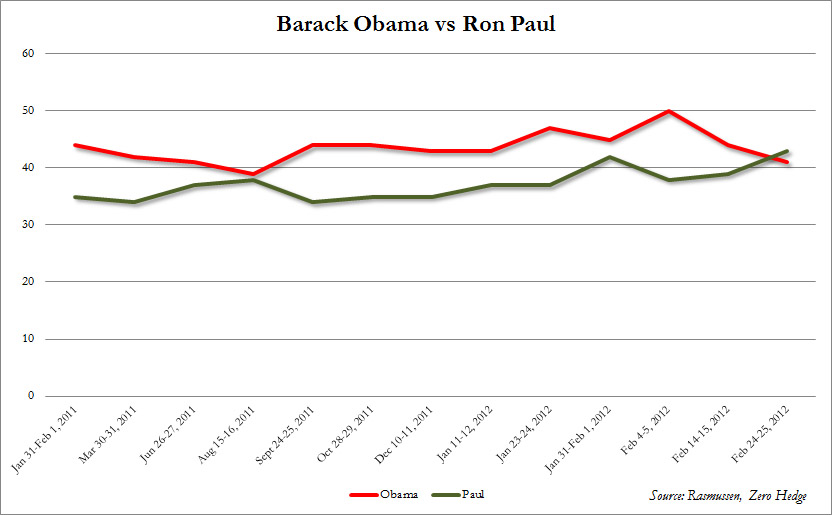 Some more from today’s Rasmussen blog:

The Rasmussen Reports daily Presidential Tracking Poll for Wednesday shows that 25% of the nation’s voters Strongly Approve of the way that Barack Obama is performing his role as president. Forty percent (40%) Strongly Disapprove, giving Obama a Presidential Approval Index rating of -15 (see trends).

Read moreRon Paul Defeats Obama In Head To Head Polling (Here’s a chart you won’t see anywhere in the mainstream media – not the right, and certainly not the left.)

Worldwide: Recovery is … the Greatest Depression (& War is peace).

In Japan: Recovery is … being sacrificed to the God of nuclear power. (Japan is finished.)

I have no information as to how the word “recovery” is defined in the post-“cold shutdown state” declaration Japan.

As one year anniversary of the March 11, 2011 disaster approaches, a symposium was held in Rome on February 29 where experts held discussions on the recovery of Japan’s disaster affected areas and on the issues that Japan and Italy face. In his speech, Ambassador Masaharu Kono thanked Italy by saying “We were overwhelmed by the “kizuna” [tie that binds; it originally meant “a leash to tie down or restrain animals”] (in the form of support from various countries)”. He declared “Japan has recovered”, urging for the resumption of the tourism to Japan and investment in Japan

Every year in February, the Treasury department releases its adjustment to foreign purchases of Treasury bond holdings as of the previous June (with revised and overriding estimates for all the intervening months in the interim, as well as previous monthly forecasts). It did that earlier today. And while many may have been expecting the revision to show that contrary to Zero Hedge claims China has in fact been building up its Treasury stake (following the now traditional transfer of UK purchases to China), the reality is that not only has China indeed been dumping US exposure (first reported by us previously when we observed the plunge in holdings in the Fed’s custodial account), selling over $100 billion in Treasurys in December alone (bringing its total to $1152 billion, and down 12% from its June total of $1307 billion) but that probably far more curiously, the UK is no longer a shadow buyer of Chinese bond accumulation and instead has become a secret accumulator of Russian holdings.

First, here is a link to the revised TIC data as of this afternoon. That lack of Chinese trade surplus is really starting to bite not only China, but also the US, which as we noted last time, will be forced to rely ever more on domestically funded purchases of USTs: read Primary Dealers and the Fed, as the rest of the world developing world, also known as US Treasury buyers, clams down and exports far less to a recessionary Europe and contracting America. As the chart below shows, Chinese holdings are sliding, no matter how one cuts the data. 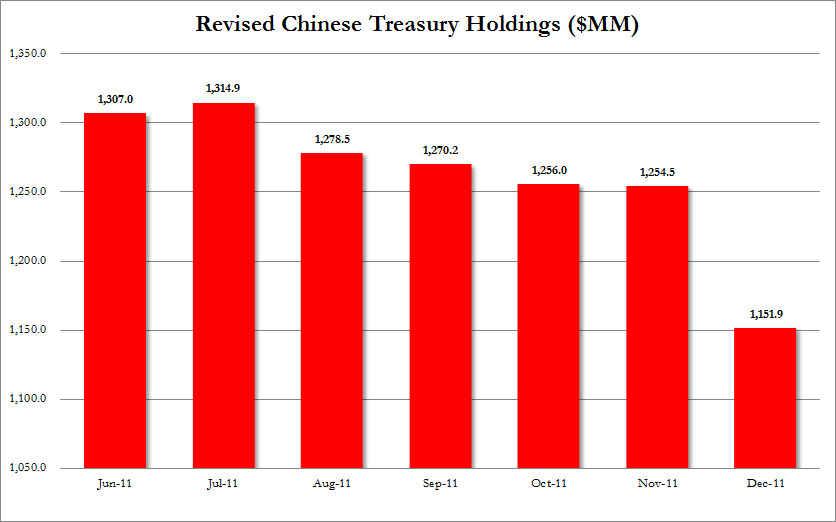 So compared to the pre-revision Chinese holdings number, which was $1101 billion, China is still accumulating bonds, right? Well, not really, because on one hand a decline is a decline even relative to a different benchmark. But more importanly, most had assumed that the UK’s pre-revision number of $414.8 billion in Treasury holdings would be allocated almost entirely to China. As it turns out it wasn’t.

Prof. Ogawa (68) from Risk management department of Chiba institute of science was found dead on the street. A passerby found him and reported.
It was in Chuoku Kobe, 2:55 AM 2/25/2012.

Only administrative autopsy was operated for some reason. As the result, it was death of disease.

He attended at a meeting of National research institute for earth science and disaster prevention.

He specialized in earthquake engineering, belonged to atomic energy society of Japan.