Time to think about the best place where to bury your gold.

Gold may not be ‘money‘ to the Chairman, but it sure is to Turkey. The WSJ reports that “The Turkish government, facing a bloated current-account deficit that threatens to derail the country’s rapid expansion, is trying to persuade Turks to transfer their vast personal holdings of gold into the country’s banking system.” The reason: “The push to tap into the individual gold reserves—the traditional form of savings here—is part of Ankara’s efforts to reduce a finance gap that is currently about 10% of gross domestic product.” In other words, “sequester” the population’s hard assets (politely of course), and convert these to paper to fund the country’s creditors, both foreign and domestic. Mostly foreign. In other words, Southeast Europe is slowing becoming the staging ground for the 21st century equivalent of Executive Order 6102, where first Greek, and now Turkish gold, is about to be pulled from point A to point B, where point B is some top secret vault deep under London. 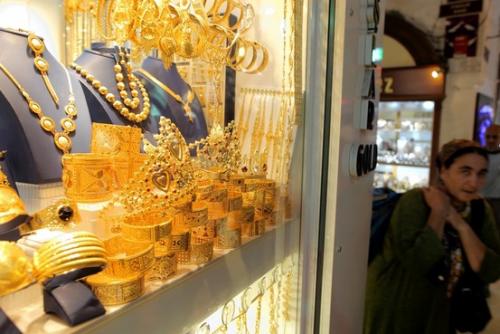 How will Turkey spin gold confiscation in the politest of ways? The WSJ has details:

Government officials say the banking regulator will soon publish a plan to boost incentives for consumers to park their household wealth inside the financial system. Banking executives said they are considering new interest-yielding gold-deposit accounts that would allow savers to withdraw gold bars from specially designed automated teller machines.

The moves come after the central bank in November announced that lenders could hold up to 10% of their local-currency reserves in gold, in part to tempt Turkey’s gold hoarders to deposit their jewelry, coins or bullion at banks.

Economists say the policy shift is designed to change Turks’ historic preference for storing a high percentage of personal wealth outside the banking system as a way to protect themselves against the economic volatility that has periodically hit Turkey in recent decades.

The effort is one front in a broader battle to encourage more savings while curbing the ballooning current-account deficit—a pressure point many investors fear could upend a fast-growing economy, estimated to have expanded more than 8% last year. Turkey’s current-account gap has expanded faster than expected in recent weeks amid a surge in oil prices and data showing unexpectedly high consumer demand.

We wish them luck:

For some Turks, the government will have to unveil a lot more sweeteners before they part with the family gold.

Because what may not be apparent to a Princeton Ph.D., is more than obvious to a 70 year old housewife in Istanbul:

“I’m keen to save, so keeping gold at home is easy for me; there is no complicated procedure,” said Ayten Altin, a 70-year-old housewife in Istanbul. “In an emergency, I can convert it to cash and I don’t have to wait for the bank to say the asset has matured.”