In what could prove to be the most critical unintended consequence of the ECB’s LTRO program, we note that as of last Friday the ECB has started to make very sizable margin calls on its credit-extensions to counterparties. While the hope was for any and every piece of lowly collateral to be lodged with the ECB in return for freshly printed money to spend on local government debt, perhaps the expectation of a truly virtuous circle of liquidity lifting all boats forever is crashing on the shores of reality. This ‘Deposits Related to Margin Calls’ line item on the ECB’s balance sheet will likely now become the most-watched ‘indicator’ of stress as we note the dramatic acceleration from an average well under EUR200 million to well over EUR17 billion since the LTRO began. The rapid deterioration in collateral asset quality is extremely worrisome (GGBs? European financial sub debt? Papandreou’s Kebab Shop unsecured 2nd lien notes?) as it forces the banks who took the collateralized loans to come up with more ‘precious’ cash or assets (unwind existing profitable trades such as sovereign carry, delever further by selling assets, or subordinate more of the capital structure via pledging more assets – to cover these collateral shortfalls) or pay-down the loan in part. This could very quickly become a self-fulfilling vicious circle – especially given the leverage in both the ECB and the already-insolvent banks that took LTRO loans that now back the main Italian, Spanish, and Portuguese sovereign bond markets. 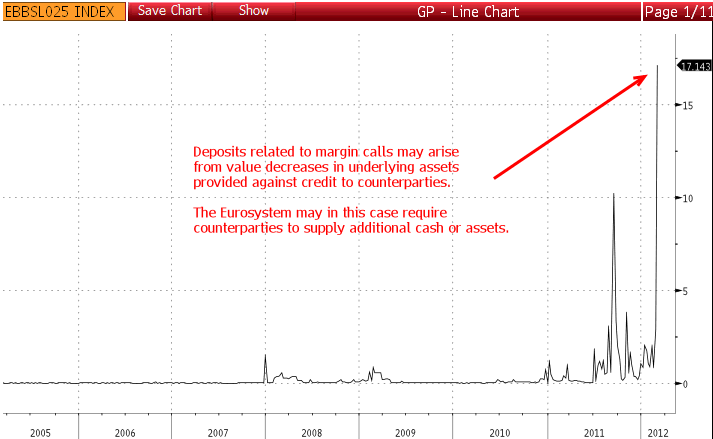 This huge increase in margin calls can only further exacerbate the stigma attached to LTRO-facing banks – and as we noted this morning (somewhat presciently) both the LTRO-Stigma-trade, that we created, and the potential for MtM losses on the carry-trades that LTRO ‘cash’ was put to work in could indeed start a vicious circle in European financials, just as everyone thought it was safe to dip a toe back in the risk pool.

What should also start to worry the Germans is the fact a 37x levered central bank with EUR3 trillion balance sheet that has extended credit in a ‘risk-managed’ approach on what appears to be an ever dwindling supply of performing collateral is starting to see dramatic ‘gaps’ in its asset-liability exposure (but rest assured Bernanke told us that our FX Swaps are safe as houses).

One last point should be noted – the hopes of an LTRO3 or some such are surely now out of the window as clearly banks have run dry of any and all reasonable collateral or can the sovereign bonds purchased using LTRO1 and LTRO2 funds be lodged once again in a rehypothecated miasma circling the drain?