– According To Reuters, Soaring Energy Prices Are A Good Thing (ZeroHedge, Mar 4, 2012)

When it comes to reporting the news, Reuters ability to get the scoop first may only be rivaled by its ability to “spin” analysis in a way that will make a normal thinking person’s head spin.  Such as the following piece of unrivaled headscrathing titled “The good news behind oil prices” whose conclusion, as some may have already guessed, is that “the surge in crude oil is looking more like a harbinger of better days.” Let’s go through the arguments.

From Reuters: The good news behind oil prices

Translation – Logic aside (namely that there is absolutely no connection between the precedent and antecedent sentences, but we’ll let that slide) the fact that at least $140 billion has been removed from consumers’ pockets YTD on an annualized basis (0.9% of GDP per $10 oil price increase), and has offset all the benefits from the payroll tax extension and then some, is not only irrelevant, but is apparently good news. Ignore that retail sales are abysmal for 3 months running, consumer spending has plunged and has already cost the US economy 0.3% in Q1 GDP, and all this happened even before the oil price surge, not to mention and European inflation is already above expectations on record Brent in Euros. All that matters is consumer confidence which is based on media “arguments” such as the one being deconstructed.

2. “Equity prices have risen in lockstep with oil’s advance. When the two rise together, it usually indicates a broad-based economic expansion.”

Translation – Reuters appears to have forgotten those long ago days of, oh, 2011, when equity prices and oil rose in lockstep too. 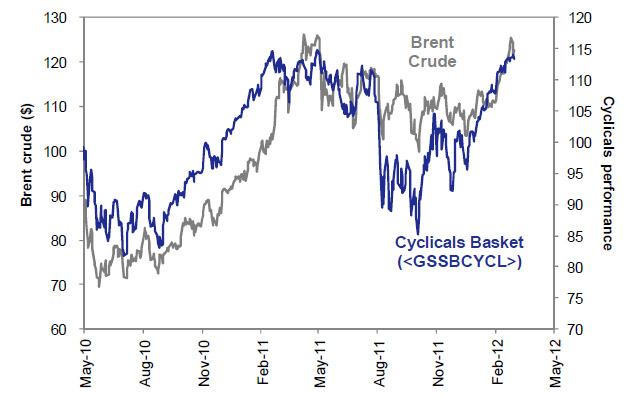 Then everything came crashing down. And no, it does not indicate a broad-based economic expansion, although first-year journalism grads are excused for thinking that (if not so-called ‘strategists’ from Deutsche Bank) – what it does indicate is an exponentially rising central bank balance sheet which is seeping into and inflating asset prices across the board, in the process sowing even more seeds of runaway inflation when the velocity of money finally picks up. 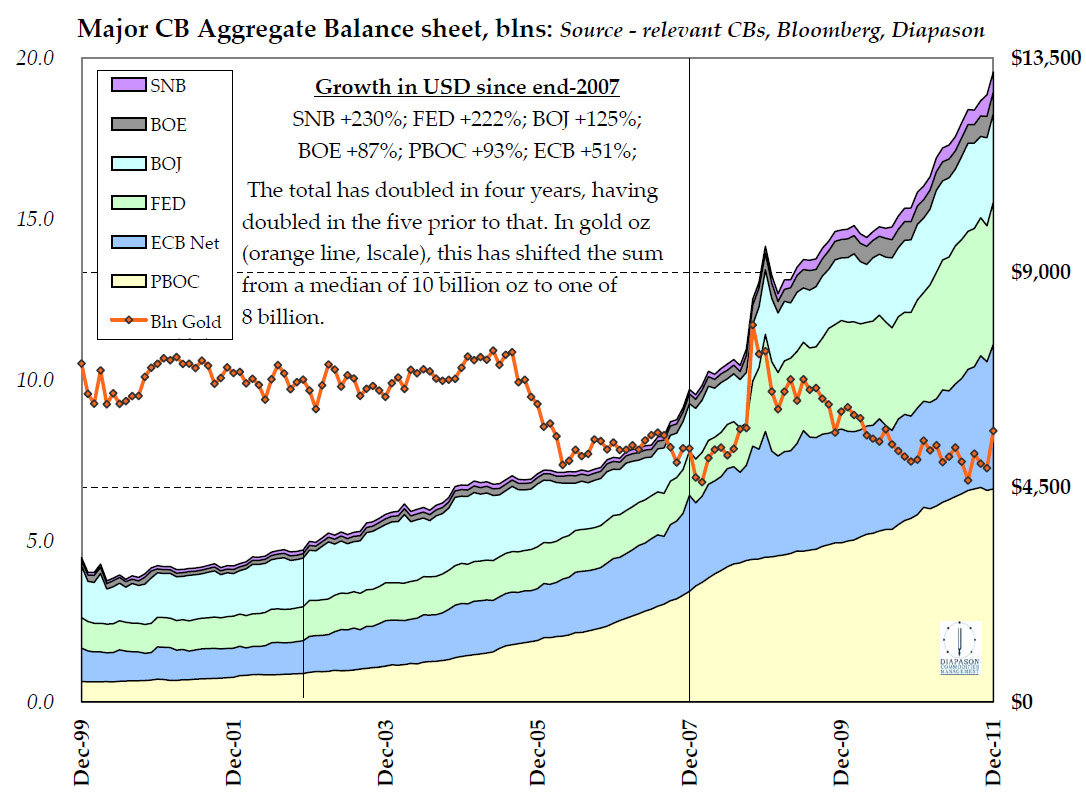 3. “The world’s factories are churning out goods at a faster pace, a key indication of the economy’s strength, meaning it is in better shape to handle a supply shock from Iran than a year ago.”

Translation – ignore consistent sub-50 prints from Europe, a once again sliding Chinese economy, and a US Manufacturing ISM which was just barely above the lowest Wall Street expectation. Also ignore an abysmal Baltic Dry Index, and now sliding rail index. Just focus on the fact that the “world factories” are supposedly churning out goods at a faster pace, in some magical universe. Perhaps global channel stuffing, ala GM is considered an indication of the “economy’s strength” – we are just a little more skeptical, and think it is a “key indication” that the economy is about to take the Chevy Volt out to pasture courtesy of a massive inventory glut.

4. “We think that crude oil prices have risen more because of improving sentiment regarding global growth than because of geopolitical risk concerns,” Deutsche Bank told clients.”

Translation – Speaking of Deutsche Bank, here is the “The Trinity of Bull.” Nuf said.

5. “A sterner test will be whether consumers can absorb the higher costs at the gasoline pump, since their spending accounts for about two-thirds of all economic activity in developed economies. And that will depend upon wage gains.”

Translation – There’s myth. And then there is the truth is that in order to pad his reelection campaign, Obama has forced wage gains to be annihilated as proven yesterday, and even though the US economy has supposedly added 1.9 million people in the past 12 months, the aggregate tax withholdings – the most realistic indication of cash flow – are lower than a year ago, meaning that the low wage job additions have come at the expense of high wage losses. In other words: quantity of jobs up, quality of jobs way down. But how cares about details.

6. “A warm winter and a 30 percent plunge over the past three months in prices for natural gas, the fuel used to heat most American homes, have cut the average household energy bill. And more people have jobs today, providing more of a cushion to absorb costlier gasoline.”

Translation – a warmer than average winter has done nothing but pull consumption forward. As Goldman showed on Friday, this one-time climatic aberration will now result in a drag on the economy, as warmed weather unfortunately did not help money to grow on trees any faster.

Translation – It is quite possible that adjusted, birth-death’ed jobs, pro forma of a labor force participation collapse will come in great. Or whether we will have another record surge in part-time workers? In fact if the LFP rate is under 58%, America will have a negative unemployment rate! The only question is just how many millions in “vapor” jobs will have to be added to the real number (2.9 million in January) to make the US economy appear to be growing on part-time fumes, 7 months ahead of the US breaching it debt ceiling again.

8.  “Inflationary pressures would complicate the role of central banks, possibly quashing prospects for further monetary support for the recovery.”

Translation – Wait, so recent journalism grads do know about the linkage between inflation and central bank balance sheets. But wait, why need monetary support? Isn’t this whole article premised on the fact that the economy is in a sustainable recovery? Oh who cares…

But the best is Reuters uncontested conclusion: “But for now, rising oil prices largely are a growth story.“